Christine Curtiss, left, in front of the Hollywood shelter she moved to last year, with her best friend and advocate Kym Moore. Photo by Larry Hirschowitz for KCRW.

One day in 2016, Christine Curtiss walked out of a 7-11 somewhere around the Miracle Mile area. She doesn’t remember what she bought, but she remembers a large black vehicle pulling into the parking lot. A man got out and walked towards her.

“I thought it was just some rich guy who was coming to hand me money,” she recalled. “And it turned out to be Mayor [Eric] Garcetti.”

Rain was expected to pummel Los Angeles that week. Garcetti had a piece of advice to share.

“He said I should go to a shelter,” Christine said. “That’s all he had to say.”

She laughed. “I kind of thought, maybe this is a good luck charm,” she added. “But a lot of bad things went on after that. So then I thought, maybe he put a curse on me.”

This anecdote opens the third episode of my podcast series “Samaritans.” It’s one of those stories you can turn over and over, examining from different angles. Hold it one way and it’s a nice story. A moment of compassion between the city’s top official and one of its most vulnerable residents. Certainly this is how Garcetti frames it. When I played the tape of Christine recounting this memory for him, he chuckled.

“You know,” Garcetti said, “since I’ve been a councilmember and before that, before I was an elected official, I always try to look people in the eye. I try when I have time to give advice or ask if they’re hungry, see if I can help them out.” 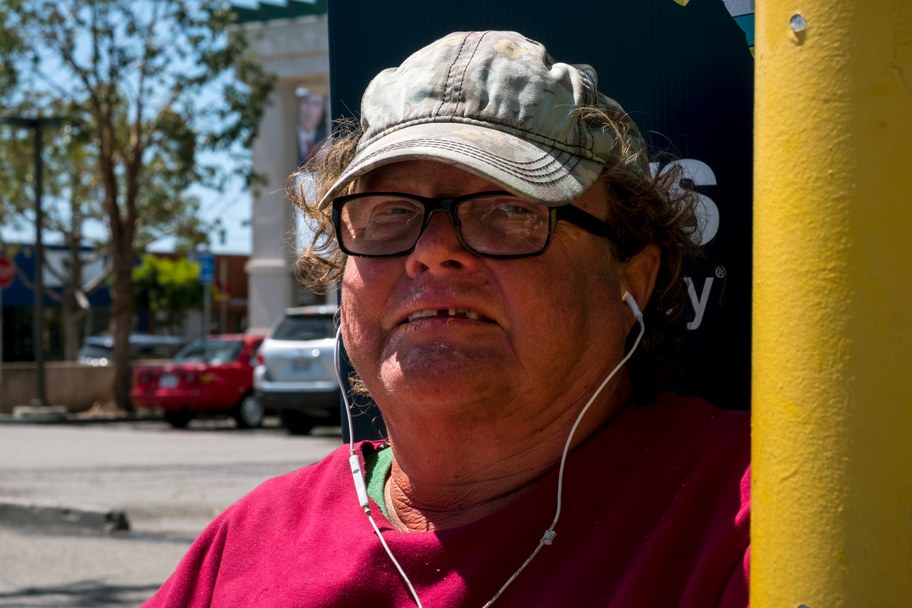 Christine at a bus stop on Pico Boulevard. Photo by Bill Aron for KCRW.

Turn the story over again, however, and it shows you some of the shortcomings of local government in dealing with LA’s homelessness crisis. In 2016, Los Angeles County counted about 43,000 people experiencing homelessness. For all those people, there were approximately 12,300 emergency or transitional beds, as well as a shortage of permanent affordable homes. In the City of Los Angeles, many of the emergency options were clustered in Skid Row, about seven miles from the neighborhood where Christine stayed. And on top of that, there weren’t  —and still aren’t — many places where you can just show up and immediately get a bed. That’s despite years of lawsuits and court rulings trying to spur the city and county to create more spaces for people experiencing homeless to go indoors, even temporarily.

So as Garcetti drove away from the 7-11 that day, Christine felt that his advice was useless. She ended up sitting out the rainy days to come at a local McDonald’s. Three years went by before Garcetti popped back up in Christine’s life with a more useful offer. He’d begun opening new, medium-term shelters all over the city and Christine was offered a spot in one in Hollywood.

Would she take it? I hope you’ll listen and find out.

Listen to the rest of the series below:
Episode 1. 'It’ll Get Done When It Gets Done'
Episode 2: 'That Is The System'
Episode 4: Homecoming