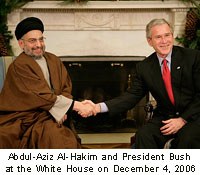 Last week two massive truck bombs killed 100 people in downtown Baghdad and wounded 1000 more, a serious blow to Prime Minister Nouri al-Maliki. He'd been dismantling blast walls and claiming that Iraqi forces could maintain security now that US troops have pulled out of the cities. The death of rival leader Abdul Aziz Hakim, who today succumbed to cancer, has increased political uncertainty. In the aftermath of the US invasion, Hakim gained enough power to be a visitor at the Bush White House, but also had close ties with Iran. Is the time ripe for another Sunni insurgency? Will the Kurds start a civil war? Iran and the US are competing for influence in Iraq. Will American troops be dragged back in or are US interests best served by continuing to withdraw?

Kennedy's Death Marks End of an Era in American Politics

James Sterling Young, director of the Kennedy Oral History Project at the University of Virginia, says, “Most people grow up and go into politics. The Kennedys go into...

Democrats Lose a Big Presence in the Senate

The so-called “Liberal Lion” of the US Senate, Democrat Edward Kennedy of Massachusetts, succumbed to brain cancer last night at the age of 77. Speaking today from...