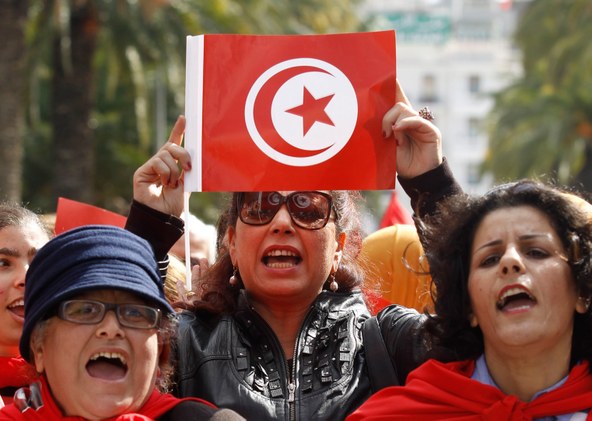 A Tunisian woman holds up a flag during a march to celebrate
International Women's Day in Tunis March 8, 2014
Photo by Zoubeir Souissi/Reuters

Tunisia has been a pioneer for women's rights in the Arab World since 1956, when it approved divorce and outlawed polygamy. Now, it's taken another major step forward with new protections against domestic abuse — outlawing violence against women and enacting new penalties against their abusers. Rothna Begum, who researches women's rights in the Middle East and North Africa for Human Rights Watch, says the law will have important implications for the whole region.

President Trump today hosted two Republican Senators at the White House with a new bill that they say would cut legal immigration in half in 10 years. Green cards would be...

The president and the economy: winners and losers

As the stock market hits the highest level it's ever been, President Trump is celebrating what's often used as a measure of the US economy. But the devil is always in the...

A Tunisian woman holds up a flag during a march to celebrate International Women's Day in Tunis March 8, 2014 Photo by Zoubeir Souissi/Reuters Tunisia has been a pioneer...