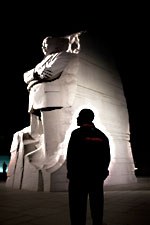 Dr. Martin Luther King, Jr. dreamed of a colorblind society. Forty-three years after he was gunned down, the first black president is running for re-election. Barack Obama has been criticized by African-Americans, including Cornell West and Tavis Smiley, for failing to focus more on the problems of black people. Republican challengers have called him a "food stamp president" who doesn't "understand America" and wants to "transform" it into a "socialist" country. Is that political code implying that a black man is different from other Americans? Is race still very much a part of American politics?

The search continues for 16 people still missing after the Italian luxury cruise ship Costa Concordia hit a rock and rolled on to its side Friday off the island of Giglio in...

Dr. Martin Luther King, Jr. dreamed of a colorblind society. Forty-three years after he was gunned down, the first black president is running for re-election. Barack Obama...

Former Utah Governor and Ambassador to China Jon Huntsman dropped out of the race for the Republican presidential nomination today.