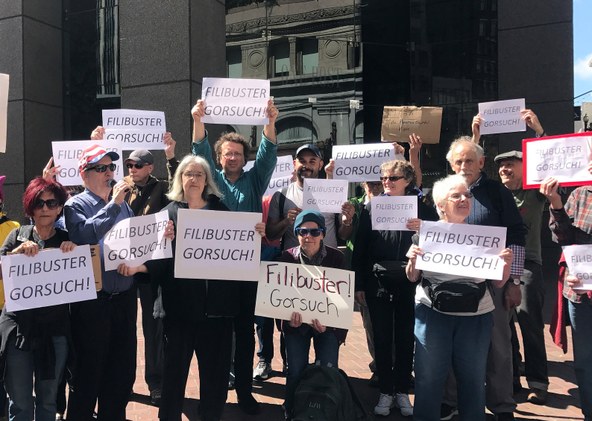 Several Democrats on the Senate Judiciary Committee made clear today why they won't vote to confirm the President's nomination of Appellate Judge Neil Gorsuch to the US Supreme Court. Al Franken of Minnesota voiced concern that confirming Gorsuch "would guarantee 40 more years of 5-4 decisions favoring corporations over workers and consumers, preventing Americans from getting access to the courts, favoring dark money in our elections and giving states a permission slip to target people with almost surgical precision." But, Majority Leader Mitch McConnell, Republican Majority Leader, says Gorsuch will be confirmed, "one way or another." Thomas Mann, senior fellow at the Brookings Institution and a resident scholar at UC Berkeley, discusses possible changes in the US Supreme Court… and in the US Senate.

The US gets deeper into Middle East wars. What's the endgame?

A shrapnel-filled explosive device blew a hole in a commuter train this afternoon in St. Petersburg, Russia’s second largest city. At least 11 people were killed, and a...

President Trump wants the Pentagon to "fight to win," and battlefield commanders now make decisions that used to come from the Obama White House. There's been increased...

Photo by Master Steve Rapport Several Democrats on the Senate Judiciary Committee made clear today why they won't vote to confirm the President's nomination of...