White supremacist groups use the Internet to spread hatred of black people. Some of their leaders also back Republican politicians. A case in point is a website that might have been Dylann Roof's call to action. In an online manifesto attributed to him, Roof – who has been charged with last week's murders of nine black people in a historic church in Charleston, South Carolina -- says he learned of "brutal black on white murders" from the website of the Council of Conservative Citizens. "At this moment," he says, "I realized that something was very wrong." Keegan Hankes is a research analyst for the Southern Poverty Law Center's Intelligence Project, which tracks hate groups. 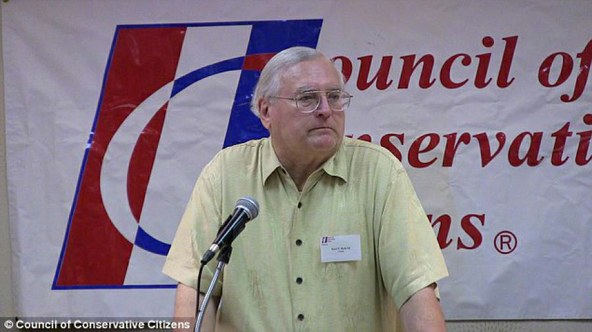 Earl Holt III, president of the Council of Conservative Citizens,
in an image from the council's website

Both Israel and Palestinian militants are accused of what "may amount to war crimes" in last year's bloody battle in the Gaza Strip. That's the finding of a two-person,...

The latest Global Trends report by the UN's High Commissioner for Refugees contains shocking figures. The number of forcibly displaced people around the world has doubled...

White supremacist groups use the Internet to spread hatred of black people. Some of their leaders also back Republican politicians. A case in point is a website that might...

END_OF_DOCUMENT_TOKEN_TO_BE_REPLACED
KCRW's Power in Numbers Drive: It's the FINAL WEEKEND to double your meals to our food bank partners in Los Angeles and Santa Barbara. Help us fight food insecurity!
Give Now
Give Now