Tomorrow, President Obama and Chinese President Xi Jingping will meet in Rancho Mirage to deal with a host of political and economic issues that unite and divide their countries. It's fitting that the summit is being held in California, given China's growing importance to the state's economy. Chinese individuals and companies are investing ever more heavily in many segments of the state, from high-tech companies in the Silicon Valley to commercial and residential real estate in Southern California. KCRW's Saul Gonzalez profiles the Chinese spending spree in the Golden State. He starts by joining a group of Chinese tourists at Universal Studios Hollywood. 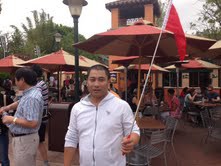 Diverse investments have made Koch Industries of Wichita, Kansas a billion-dollar conglomerate, but the Koch brothers are better known for putting big money behind...

An LA Institution Up for Grabs

After years of alleged mismanagement and felony corruption charges, the commission running the state-owned Los Angeles Coliseum is leasing it out to the University of...

Tomorrow, President Obama and Chinese President Xi Jingping will meet in Rancho Mirage to deal with a host of political and economic issues that unite and divide their...

END_OF_DOCUMENT_TOKEN_TO_BE_REPLACED
KCRW's Good Old Fashioned Pledge Drive:  Pledging just got delicious. Give TODAY for 3x your chances of winning up to $1,000 in free food from Postmates!