We all know that Southern California is becoming a center for wind and solar development. One more exotic-sounding strategy involves something almost as familiar as the sun and the wind. It turns out that algae, which we think of as that slimy green stuff that forms when water's allowed to stand for too long, can be transformed into substances that are useful for fuel, pharmaceuticals and food. Experts say that algae is no silver bullet to solve the energy crisis, but could be a part of the mix. As with other alternatives, development will require a huge infrastructure, and that will require the support of government and its regulatory muscle before investors will be willing to put up the money. KCRW's Andrea Brody visited Origin Oil, a company that's been developing algae here in Los Angeles since 2009. 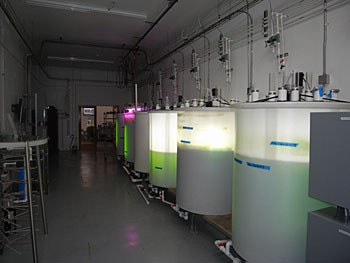 The weekend is almost here! Join us as we dive into Jamie Branch's new material Morning Becomes Eclectic May 14

CicLAvia Encourages Angelinos to Abandon Their Cars This Sunday

The second annual CicLAvia — that's a bicycle trip in LA — will be held on Sunday with 7.5 miles of car-free cycling, walking, jogging or skating. Aaron Paley, president...

Who's to Blame if the US Government Shuts Down?

As Washington moved toward a federal government shutdown starting at midnight tomorrow, politicians of both parties assumed their competing postures. From Capitol Hill to...

Developers of renewable fuels might be a boon to California's sluggish economy, but they're being pulled in two directions. In Washington, Republicans are trying to make a...

We all know that Southern California is becoming a center for wind and solar development. One more exotic-sounding strategy involves something almost as familiar as the sun...