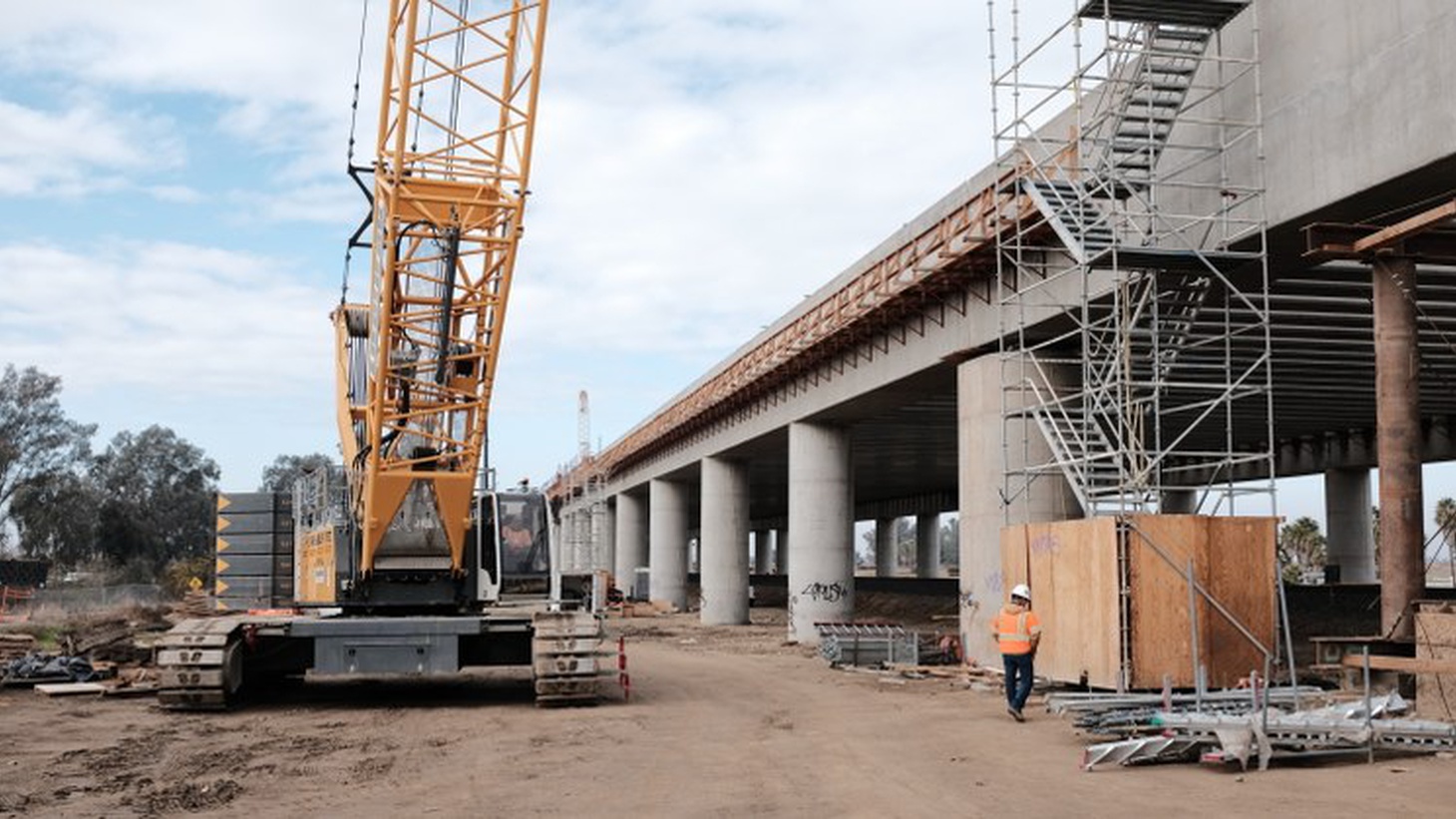 Work is underway on high-speed rail tracks in the Central Valley, which could contain the entire breadth of a line that was supposed to zip passengers between LA and San Francisco. Photo by Avishay Artsy.

“Stop where you are,” declared the mustachioed detective, in a European accent, as he entered the Assembly chamber.

“There has been a murder here in the Capitol!”

Legislators looked puzzled. Had they entered an Agatha Christie novel?

A progressive Democrat said, “We are unaware of any murders, other than our usual killing of moderates’ arears. Who’s your victim?”

The detective held up a handkerchief bearing the monogram “HSR.”

“That can’t be!” shouted the governor, who had rushed to the chamber upon hearing that international media might be present. “The only HSR we know is high-speed rail, America’s most ambitious project. And it’s not dead.”

The detective arched an eyebrow. “How can you be so sure?”

“Because I’m saving it,” the governor said, “by downsizing the San Francisco-to-LA project into a Merced-to-Bakersfield route.”

“Governor, you have just confessed!” the detective replied. “Proposing a $100 billion train between two cities without a Michelin star restaurant between them demonstrates homicidal intent toward the very concept of passenger rail.

“Next question: Governor, did you act alone?”

“Are you accusing me, detective?” the Assembly speaker said from the dais. “Who are you anyway? How did you get here?”

“I’m M. Hercule Poirot, and I was on the express to Istanbul when Interpol called. I flew Turkish Airlines to SFO, took BART to catch the Amtrak to Sacramento, which was lovely but empty. Then I made the mistake of trying Sacramento light rail, which smelled like a crime scene … but, Mr. Speaker, you haven’t answered my question.”

“Well,” the speaker replied, “You can’t be suggesting that the Democratic lawmakers from Southern California killed it. We’re simply trying to make high-speed rail better by repurposing some of the money from the Central Valley to regional rail projects.”

Poirot furrowed his brow. “Repurposing? A curious choice of words. And you are doing this by denying the project $4.2 billion in voter-approved bond funds. Mr. Speaker, the legislature tops my list of suspects. I don’t care about your campaigns. None of you may leave Sacramento.”

"Why are you crediting the Democrats for the murder?” interjected the Republican leader. “We’ve been working to kill high-speed rail for years.”

“What good is a confession from a party that claims the last election was rigged? High-speed rail is a big economic stimulus for the Central Valley, which many Republicans represent. How does killing it make any sense? You are engaged in self-harm. I’m having you held for observation and psychological evaluation.”

There was noise from the gallery, as lobbyists streamed in to watch. One stood up and said, “Detective, I’m from the building and construction trades. You’re wrong. Our labor organizations want to build this. We’ve protected high-speed rail for years from legislative oversight.”

“Hasn’t that worked well?” the detective asked sarcastically. “Also, you demand wages that would make building high-speed rail or anything else scandalously expensive. Please consider yourself under suspicion.”

Another visitor spoke up. “I represent the California High-Speed Rail Authority, and I assure you we are constructing high-speed rail and will finish the project.”

“But have you assembled all the necessary land, 14 years after voters approved the project?”

“How about the utility relocations?”

“We’re almost halfway there in the Valley.”

“Does the authority have the staff to manage such a project?”

“I can’t speak to that. I’m just one of the consultants.”

The detective surveyed a legislative chamber full of suspects. He thought for a minute.

“This reminds me of a case from much earlier in my career, written up in a book called ‘Murder on the Orient Express.’ A train got stuck, and a man was murdered.

“I had a wide variety of suspects. The passengers all put on a great show of saying they were trying to save the victim. But in the end, all were guilty”

“The difference between California high-speed rail and that railway murder is that on the Orient Express, those killers eventually acknoweledged what they’d done. So, I showed them mercy.

“A recent poll shows Californians still want high-speed rail, so you refuse to confess. You’ve killed HSR already. But you can’t cop to the crime.”