What a 4-hour drive to Inland Empire says about family, history, time 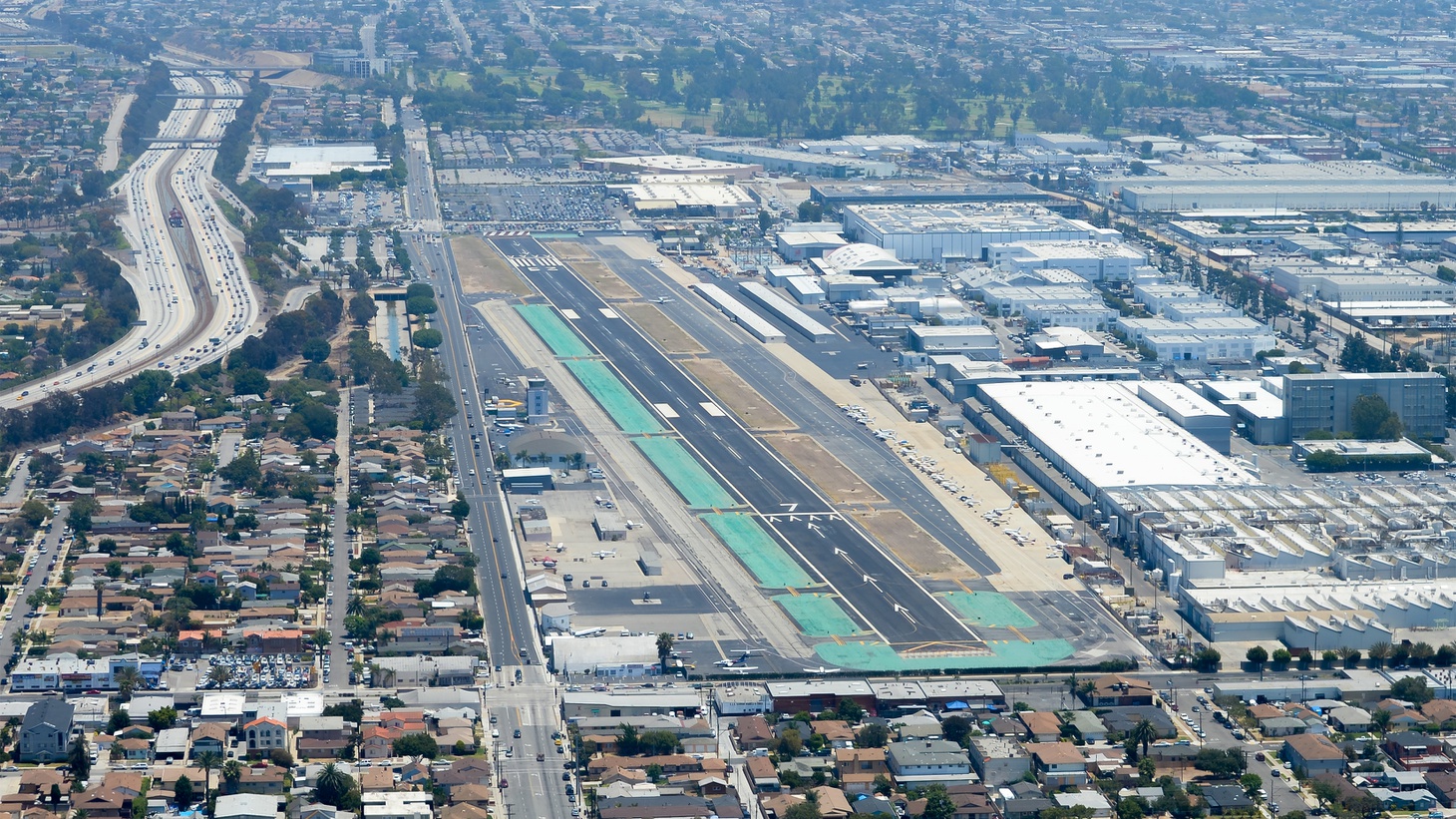 An aerial view shows Hawthorne, California. Driving from this South Bay city to Redlands without getting on a freeway is a four-hour family history lesson for commentator Joe Mathews. Photo by Shutterstock.

For commentator Joe Mathews, observing family tradition took another form this holiday season: Driving from LA’s South Bay to the Inland Empire. He didn’t take freeways, but two key surface streets — Imperial Highway and Base Line. It took a while, which allowed him to reflect on his family history and make some observations about our changing state.

Don’t ever complain about freeway traffic, especially around my mother.

And when that didn’t stop me from whining about congestion on the 10 during long drives to see relatives in Redlands, she’d respond with the Southern California version of “when I was your age, I had to walk six miles through the snow.”

“I grew up in Hawthorne,” a working-class town near LAX, she’d remind us. “And when we went to Redlands, we had to go via Imperial Highway and other surface streets.” In her telling, the trip took three hours.

Mom is 75 now, and her memory isn’t great. But I’ve never forgotten her story, and for years I’ve wondered what such a trip would be like. So, with her encouragement — she’s a retired newspaper editor — I decided to check it out. I would drive from Hawthorne to the Inland Empire city of Redlands without getting on a freeway.

The drive would trigger memories, inspire emotions, and serve as a reminder how, on California roads, time can slow down even as it hurtles ahead.

I start near Imperial Highway’s western end in El Segundo, from the former site of the North American Aviation plant where Grandma Edith, my mom’s mom, once worked the assembly line.

From El Segundo, the highway proceeds underneath the 105 freeway, which effectively replaced Imperial as an east-west thoroughfare when it opened in 1993.

Imperial Highway — really a collection of four and six-lane county roads and state highways with stoplights — was first conceived of a century ago by agricultural interests who wanted to connect LA with farms in Imperial County, 220 miles southeast.

But building infrastructure was never easy in this state. Construction on the highway got started in 1931 but wasn’t finished until 1961. By then, Imperial was becoming obsolete as long stretches of the highway were subsumed by freeways or other highways. Today, Imperial Highway doesn’t come within 100 miles of Imperial County; its eastern end is at the border of Anaheim and the city of Orange.

Heading east from El Segundo on Imperial, I stop immediately in Hawthorne, at a small apartment building that occupies the lot where my mom grew up. I also swing by the monument to the Beach Boys, whom my mom knew at Hawthorne High School. From Hawthorne, Imperial passes briefly through Inglewood and then makes its way through South Los Angeles.

To drive Imperial Highway today is to see Southern California as an unhealthy empire at war with itself. There are more check-cashing places than banks, and more liquor stores, fast-food restaurants, donut shops, and smoke shops than I can count, most in small strip malls with names like “Imperial Plaza.” Their sun-splashed marquees mix with newer health clinics and gleaming schools — public, charter, private, and religious — often fenced off.

This streetscape reflects dueling impulses. Will health care and education save us before we eat and drink ourselves to death?

Just as in the rest of California, there is not enough new housing here. Homes along Imperial are often stucco and mid-century, their ugliness hidden behind uglier walls that block the traffic noise. The two public housing projects I pass — Nickerson Gardens and Imperial Courts — are in better shape than the apartments and motels around them.

East of South LA, in Lynwood, I can’t help but stop when I see the street sign for Gary Beverly Court outside of an empty Lynwood High School building. The high school has moved, but the street sign remains, in honor of a beloved principal who was shot to death on his drive home 20 years ago. I covered the case, which remains haunting and unsolved.

After a brief detour south into Compton to visit the tombs of my great-grandparents, I head through South Gate and into Downey where a sign points me in the direction of the museum memorializing the Columbia Space Shuttle, which my grandmother helped assemble.

Traffic is slow in Norwalk, with county government buildings and churches, and faster among the houses and restaurants of Santa Fe Springs and La Mirada, the last two LA County cities Imperial runs through, that I move over to the slower right-hand lane.

Forty-one miles in when I cross into Orange County in La Habra, Imperial looks more prosperous. There are high-end retailers, yoga studios full of pretty people, and an Amazon Fresh. I push through Brea into Yorba Linda for a bit, and see a few horse trails, along with signs for the Nixon library, devoted to the only California-born president, a Whittier kid who embodied his state’s promise and paranoia.

My total drive time, not counting stops, has reached two hours. And Imperial Highway would only get me halfway to Redlands, in the northeast corner of the LA basin that is part of San Bernardino County.

So, I turn north and head through Brea Canyon on a dusty, traffic-crammed road paralleling the 57 freeway. Without a map, I drive in search of Base Line, where I’ll turn eastward. It’s the other road my mom used to mention from those long-ago drives.

It also was once among the most important routes in all of California. Base Line is older than almost everything now standing in the Los Angeles basin. In the 1850s, U.S. government surveyors, charged with establishing an “initial point” for Southern California surveys, established a north-south meridian line and an east-west baseline to guide future surveys.

That baseline became Baseline, which today goes by various names — Base Line or Baseline, Baseline Avenue or Baseline Street, or, in Upland, 16th Street. Just as the 105 freeway shadows Imperial, the 210 tracks the Baseline corridor it replaced over the past two generations.

I head through Upland, with ranch houses and a few parks, and then into Rancho Cucamonga, which seems to have an abundance of dentist practices along Base Line. “Why all the dentists?” I ask myself, before answering my own question: It must be all the donut shops!

The housing is newer — all post-war or from the 70s and 80s, but in disrepair. I am through Etiwanda and into Fontana before I spot new housing construction, a development calling itself “The Encore at Providence.”

In Rialto, Baseline becomes a divide. On the south side are homes, protected by sound walls. On the north side are warehouses. These facilities grow more massive as I move deeper into the Inland Empire, now an American center for logistics.

Sidewalks are replaced by dust, and the landscape gets browner, except for the brilliant green colors of Eisenhower High School. I feel like I’m in the country until I cross the 215 and enter San Bernardino.

To this point, the roads have been relatively smooth, but San Bernardino is a poor city even after emerging from one of America’s worst municipal bankruptcies in 2017. Base Line here is full of ruts and potholes, and my Prius bounces up and down.

I’ve been driving for more than three hours, and I’m getting close to my destination. I head through the city of Highland into East Highlands, where my grandmother, great-grandmother and other relatives worked in the orange-packing houses after arriving from Oklahoma during the Dust Bowl.

The packing company provided a small greenhouse for the family to live in here in East Highlands. That’s where my mom was heading from Hawthorne six decades ago. The house is long gone, but I find the spot, on a hillside in a planned community.

Base Line dead-ends at an orange grove, which provides a bit of agricultural respite, and beauty, between the development and a dry hillside criss-crossed with hiking trails. My great aunt and uncle, Fern and Don, remain in Redlands. So, I turn south, taking Orange Street down to the retirement community where Fern and Don now live.

My total drive time, excluding stops, has been more than four hours. But the journey has felt even longer, with time moving in reverse as I retrace my mom’s drives from six decades ago, and follow thoroughfares that date to the mid-19th century.

After navigating the community’s COVID checks, I knock on my aunt and uncle’s door. I hug Fern and spend a half hour arguing good-naturedly with Don about what he’s watching on Fox News. But I am eager to get home, without delay.

Five minutes later, I’m on the 10, heading west toward LA. This drive will take me only 90 minutes because of some traffic around West Covina. The route is not particularly scenic. But I feel renewed — with my mother’s enduring gratitude for our freeways.