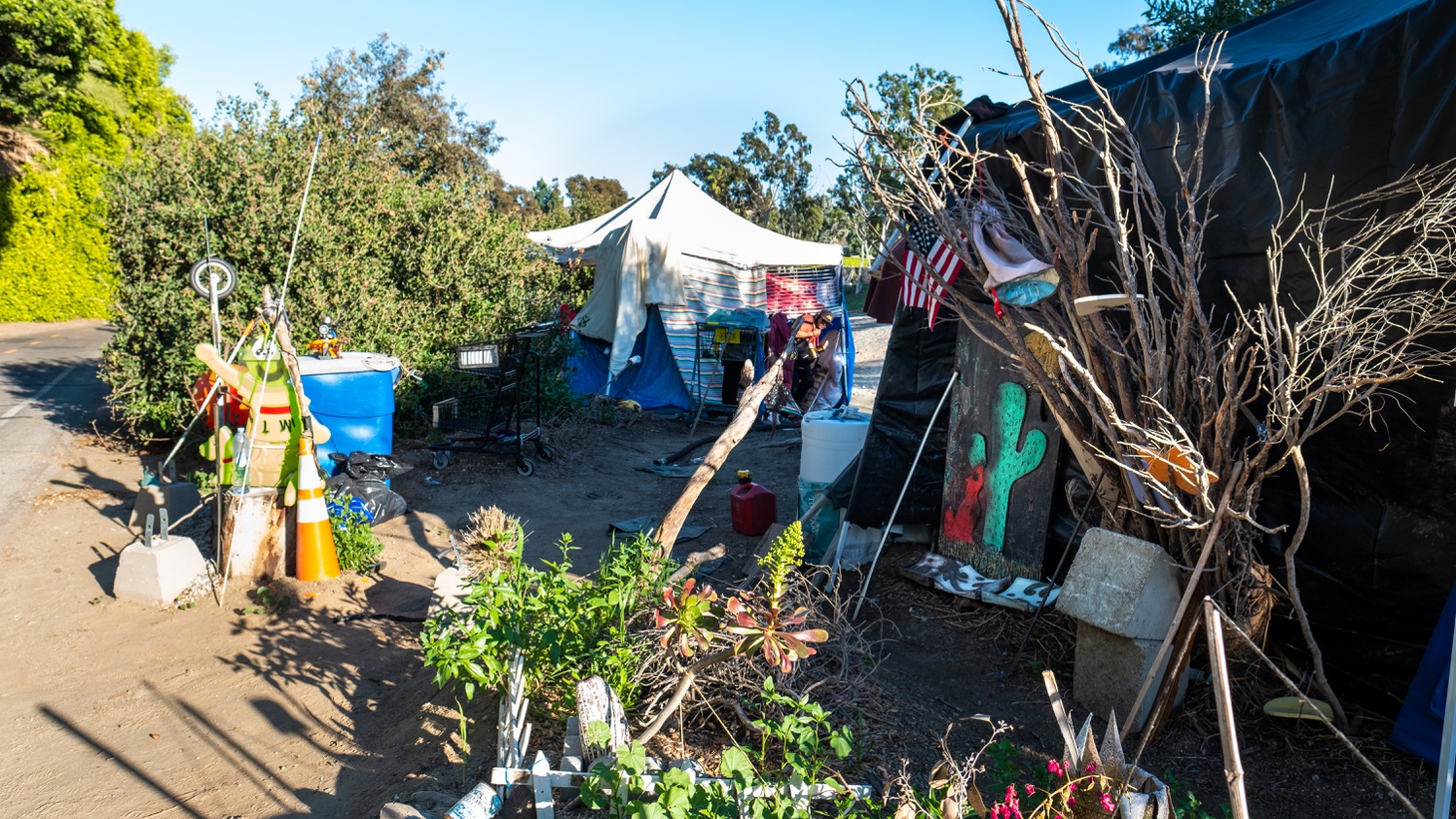 California is sitting on a nearly $100 billion surplus. But tents like these along the Ballona Creek Trail in Culver City are a common sight up and down the state. Commentator Joe Mathews says now is the perfect time to address the crisis, if only we could stop blaming each other for it. Photo by Amy Ta.

But homelessness is also incredibly useful for anyone who wants to complain about California. It allows us to say everything we want about our state.

The critics might be making novel arguments, but making homelessness a hobby horse is one of California’s most durable traditions, as old as the state itself.

In 1855, the North Carolina author Hinton R. Helper wrote the first best-selling anti-California screed, “In The Land of Gold: Reality vs. Fiction.” Helper declared that the Golden State was destined to fail — by pointing to the homeless people who filled San Francisco’s streets.

“Degradation, profligacy and vice confront us at every step,” Helper wrote. “Dozens of penniless vagabonds … are always wandering about the city in idleness and misery. [They] have no other place to rest, no bed except [bales of hay] into which they creep for shelter and slumber during the long hours of the night.”

Helper introduced a slur against California that persists today: Our homelessness reveals Californians as people of lower morals and greater corruption than other Americans. He wrote: “We know of no country in which there is so much corruption, villainy, outlawry, intemperance, licentiousness, and every variety of crime, folly and meanness.”

Californians themselves internalized the presence of street people as a moral failing — and they reacted with moral panic, and in ways that caused lasting damage. In the late 19th and early 20th centuries, Los Angeles leaders exploited fears of vagrants — poor white men labeled “hoboes” — to build an excessively punitive jail system that plagues Southern California to this day.

In the 1930s, the California political establishment capitalized on fears of homeless and poor people in order to defeat the gubernatorial campaign of Upton Sinclair, who promised to build a modern social welfare state to fight poverty.

In today’s more polarized times, the hobby horse of homelessness is more frequently put to partisan purposes. A Wall Street Journal columnist writes that California homelessness shows that “doctrinaire progressivism” is a “suicide pact.” Writer-activist Michael Shellenberger, a progressive turned right-wing darling, used homelessness to argue — in his book “San Fransicko: Why Progressives Ruin Cities” and a gubernatorial campaign — that Democrats had caused nothing less than “the breakdown of civilization” on the West Coast.

Of course, demagoguing homelessness is not an exclusively conservative practice. Among activists and writers on the left, homelessness is often described as the product of home ownership and, to quote The Nation, “the ultimate symbol” of American capitalism.

Radical and counter-productive responses also have come at the grassroots level, with some activists discouraging unhoused people from accepting offers of housing.

All sides argue that California is failing to keep up with new dimensions of the problem, including increases in the number of deaths on the streets during the pandemic.

Today, Californians rank homelessness as our state’s biggest problem. But it’s not too big to be solved — 160,000 people is less than one-half of one percent of California’s total population. Local communities have more money than ever before, from local taxes to federal relief funds, they could use to address homelessness.

Might we make progress if we stopped using the homeless to make our arguments, and instead listened more to unhoused people and sought to address their many different needs? Those who work with the homeless say that unhoused people themselves are largely untapped sources of ideas.

And if we California critics gave up homelessness as our old hobby horse, we would have no trouble finding other issues to represent this state’s dysfunction.