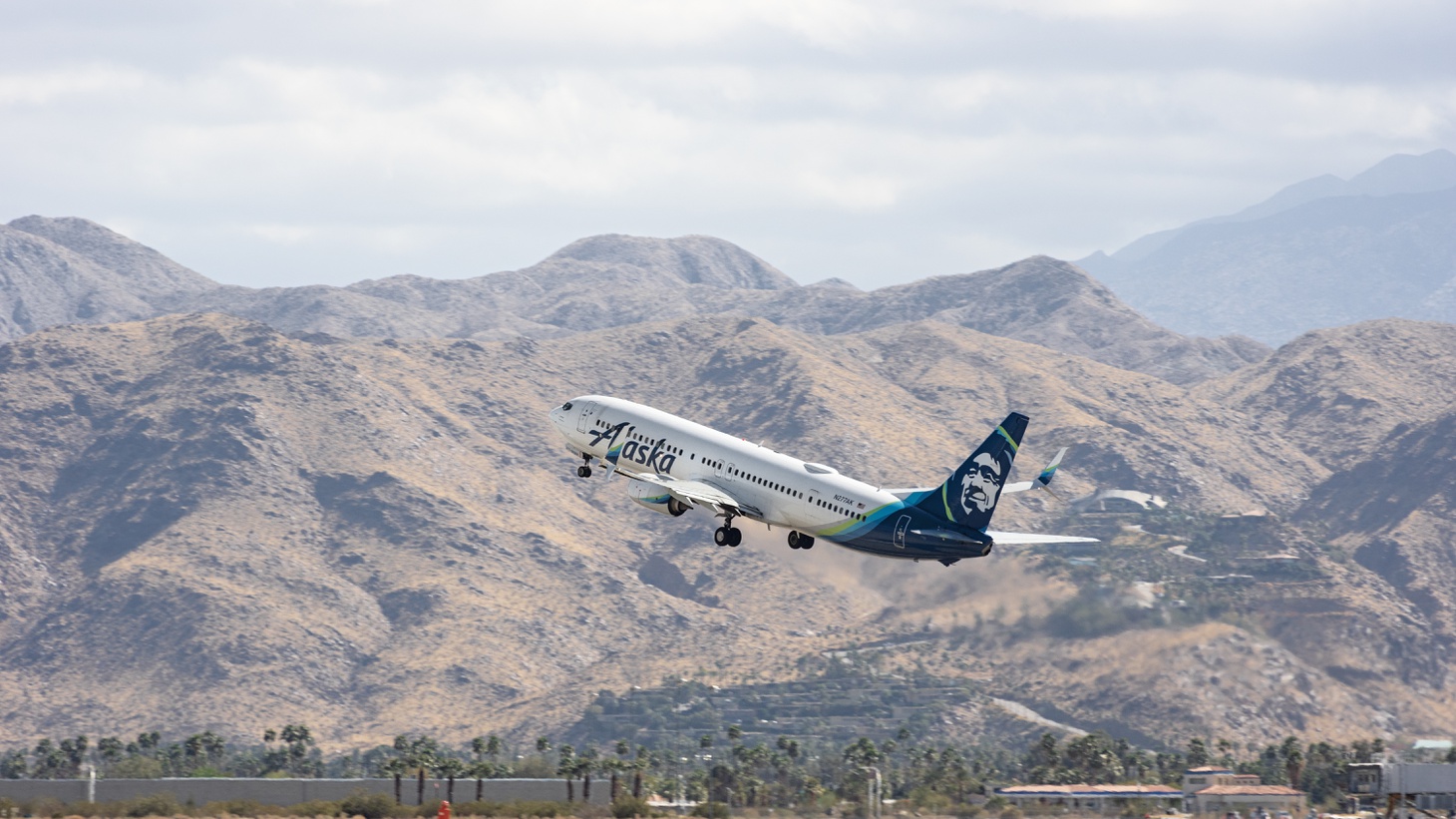 A jet takes off from Palm Springs International Airport, which has defied COVID-related slowdowns by increasing flights and passenger traffic during the pandemic. Photo by Shutterstock.

With spring just around the corner, many travelers looking for relaxation will be heading to Palm Springs. The return of visitors means Palm Springs International Airport will be humming with action in the coming weeks.

But Zócalo Public Square commentator Joe Matthews says business has actually been booming for a while at the local airport. He calls Palm Springs International a pandemic economic success story.

If you’re heading to heaven, you really should fly out of Palm Springs.

Pandemic-era air travel is a miserable combination of unhappy passengers and unreliable service, except in Palm Springs. There, flying still feels like something miraculous.

The airport is small and easily navigable. And after you speed through security, you emerge into an outdoor desert garden that might be the best waiting room in American aviation. If we're lucky, sun-splashed, open-air PSP — the airport’s code — will become a model for post-pandemic flight across California, and especially in the smaller airports of our growing inland regions.

PSP is already the people’s choice. While the pandemic has grounded the travel ambitions of other places, PSP has soared. 2021 was the busiest summer in the airport’s history. Since last June, the airport has set seven new monthly records for passengers. PSP now serves more than 2 million people annually.

Those records may keep falling. Southwest Airlines started service in Palm Springs in 2020 and now flies from there to eight cities, including Sacramento and Oakland. Other airlines have added flights to destinations from Philadelphia to Fort Lauderdale. The 13 passenger airlines serving the airport now offer 35 different routes, creating competition that lowers fares.

In local news reports, airport officials have expressed surprise at this pandemic surge. They hadn’t projected a return to pre-COVID numbers until 2023. But PSP, a former military base converted six decades ago, has long found ways to succeed in hard times.

PSP has prospered ever since the Great Recession, even as other Western airports stagnated. One reason: all the Canadian snowbirds buying Coachella Valley properties after the collapse of the housing bubble.

To serve that growing Canadian colony, the airport established non-stop service to Vancouver, Toronto, Calgary, Edmonton, and Winnipeg. In the process, PSP set new records for passengers in six of the seven years between 2012 and 2019.

The airport’s growth has been supported over the last two decades by careful and sustained investments, including a new control tower and terminal, a ticket lobby expansion and a better baggage handling system that have not cost the airport its small and convenient feel.

But Palm Springs can’t take all the credit for its growth. The awfulness of flying in and out of LAX and the horror of driving anywhere from it have driven customers to find alternatives. And Ontario Airport, the nearest Inland Empire rival to Palm Springs, has been badly mismanaged, shedding flights and passengers for most of the 2000s and 2010s.

When COVID hit, PSP, with that outdoor space, felt like a safe place to visit — not unlike Palm Springs. The Coachella Valley’s great weather, and its tradition of indoor-outdoor living has made it a popular place to pass the pandemic.

I made my maiden voyage recently on a late afternoon flight from PSP to Oakland after a tiring day of reporting around the valley.

For the first time I can remember, an airport refreshed me. I made it through security in two minutes, having to wait only for a very polite family of five, all wearing Toronto Maple Leaf sweatshirts. I lay down on a shady bench in the garden before heading up into the Sonny Bono Concourse to grab a sandwich at an open-air restaurant. While eating, I took in fabulous views of Southern California’s two highest mountains, Mt. San Gorgonio and Mt. San Jacinto. It felt a bit like visiting a desert spa.

Marveling at the scene, I told an airport worker that the only thing missing was a swimming pool. She quickly corrected me — there is a pool, but it’s in the general aviation part of the airport for those who fly privately.

I’ve heard people compare the look of the airport with attractive canopies and all that light to the sets in the NBC show “The Good Place,” a comedy that offered a sun-splashed view of the afterlife. Of course, we mere mortals have no way of knowing whether PSP really looks like heaven. But Palm Springs does have one advantage over that other paradise: an airport that makes it easy to get in and get out.