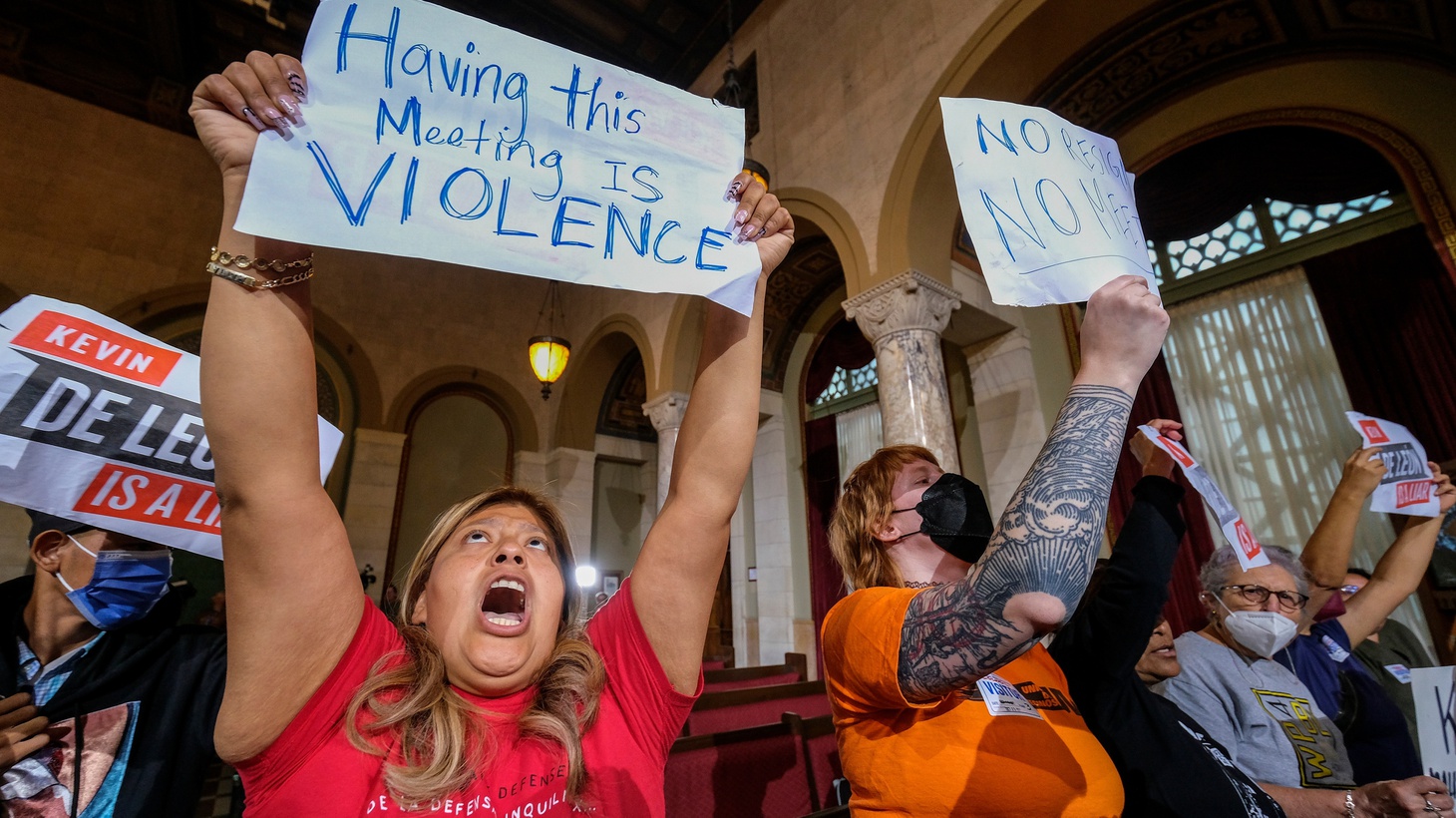 Protestors call for the resignation of LA City Councilmember Kevin de Leon for his involvement in a scandal over a leaked audio recording that contained racist comments. DeLeon physically scuffled with one critic at a Christmas toy giveaway. October 2022. Photo by Shutterstock.

As he left office in December, LA City Councilmember Paul Koretz addressed Angelenos who disrupt meetings of the scandal-plagued council with profane protests. “In their own words … F—k you,” Koretz said.

This closing comment might have seemed inappropriate. But in the council chamber, staffers jumped in delight, and Koretz’s colleagues stood to applaud.

That moment demonstrated the mutual contempt between California’s public officials and its people. It also showed just how one-sided the narrative about anger in the public square has become.

Political violence runs two ways — public officials and everyday people attack each other. But media reports focus on violence committed against public figures — like the attack on Nancy Pelosi’s husband or the men who threatened to kill U.S. Rep. Eric Swalwell and State Sen. Scott Wiener.

Journalists have been attentive to such violence because we cover political figures, and because we ourselves are frequent targets of threats. But in California, politicians have done little to protect journalists or other regular citizens who participate in the public square.

Instead, they’ve been trying to protect themselves — with more security, more restrictions on access to their offices, and more laws.

One new law, Senate Bill 1100, empowers the presiding member of a local legislative body to remove an individual judged — by the lawmakers themselves, of course — to be disruptive. This law isn’t particularly novel. State laws already essentially bar citizens from meaningful participation in governance. In public meetings, citizens are typically limited to short statements or questions — “three minutes at the microphone” — that elected officials aren’t required to answer. The new law merely extends this authoritarian direction.

But don’t expect the legislation to work as intended, by making local meetings any quieter. To the contrary, frustrated citizens will likely try to get themselves removed from meetings to register their protest and create legal causes of action against local governments.

The underlying lesson is that keeping the public away isn’t protection. It’s perilous, because it inspires contempt. You can only hide from angry constituents for so long.

Which is one reason why people are choosing to protest at their representatives’ homes. Officials of all stripes have sought to restrict such protests and protect their families and neighbors from the noise, nuisance, and conflicts of such demonstrations.

The impulse is understandable, but the restrictions haven’t stopped protesting near officials’ homes in Los Angeles, which passed such a law.

And such legislation is nakedly one-sided, because politicians haven’t stopped knocking on our doors in search of votes.

Our leaders aren’t just victims of anger — they are often victimizers, inciting threats and violence against ordinary people. Since November 2020, hundreds of election workers have quit because of harassment by election deniers, many of whom are officeholders themselves. More hateful political rhetoric coincides with a rise in hate crimes since 2014. Public officials sometimes sanction violence against protestors; three states now offer legal immunity to people who drive their cars into protests.

In this context, citizens are retreating from civic life. That’s tragic. The better way to combat political violence is to build connections. We need more spaces for public officials and regular people to get to know each other, and talk freely.

The best model I know is the South Pasadena city councilmember who takes frequent long walks through the city, chatting with people along the way. There’s no need to protest such a politician at his house — he’ll come to yours.

De León was recently caught on tape in a racist conversation. Over Christmas, de León and an activist fought physically at a toy giveaway. Why doesn’t de León heed near universal calls to resign?

Perhaps he’s become accustomed to being under attack. Years before the tape leak, de León and staffers complained of being  doxed, and harassed by activists opposed to his homelessness policies.

Would his conflict with activists end even if he quit? If you were in his place, would you give ground? Would you step down?

Or would you just say: f—k you?