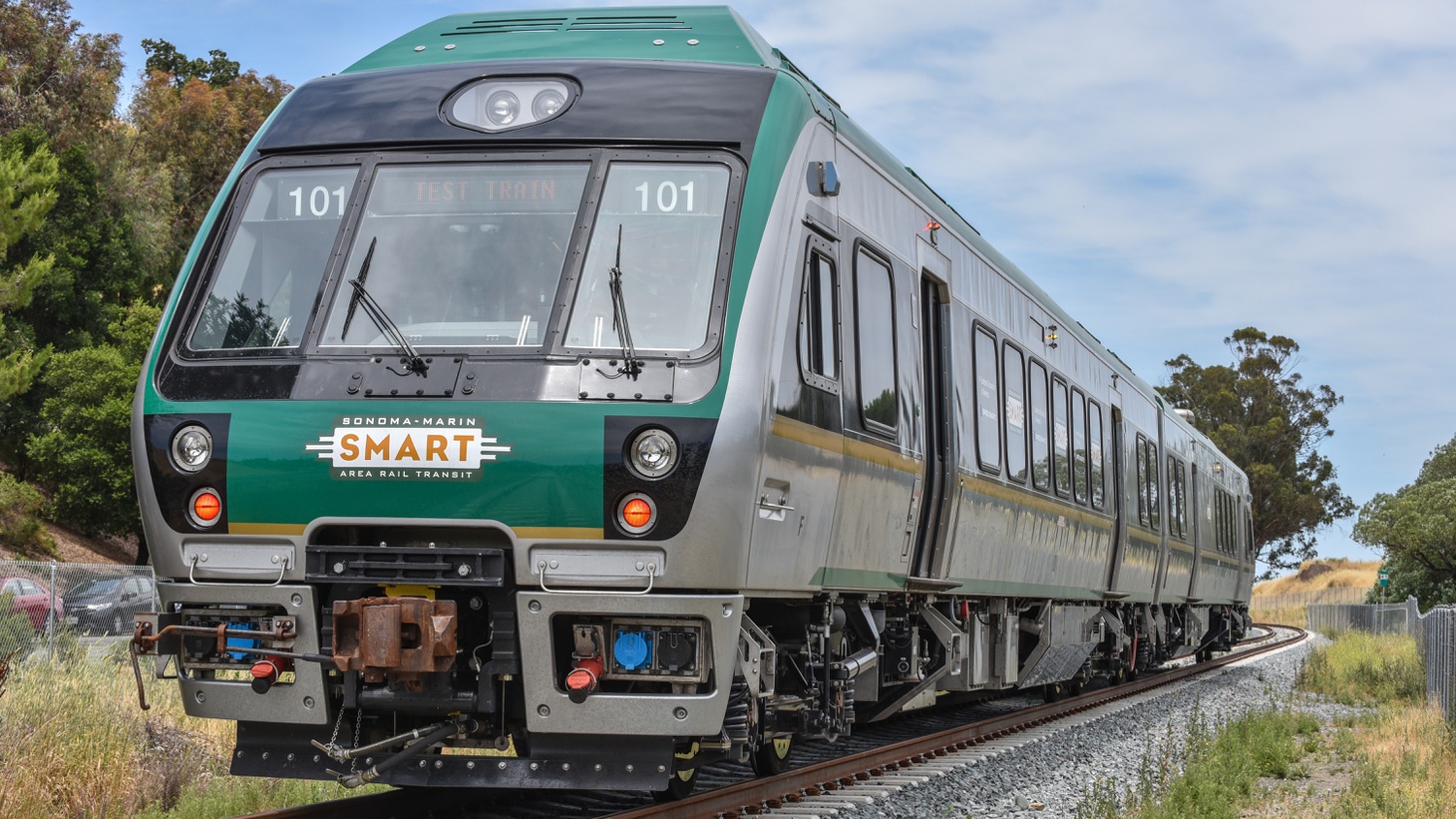 Once he found it, commentator Joe Mathews was sold on the $400 million SMART train, which connects with the Golden Gate Ferry and serves riders in Marin and Sonoma counties. Photo by Shutterstock.

If this train is so SMART, why can’t I find it?

That’s the question I asked myself at Larkspur, in Marin County, after arriving on the ferry from San Francisco one recent morning.

I was on my way to Petaluma, and had been looking forward to experiencing California’s newest and most spectacular ferry-to-train connection: the Golden Gate Ferry to the SMART train, the light rail line running through Marin and Sonoma counties.

SMART, while little-known statewide, offers big inspiration for Californians who want more infrastructure that connects us. It’s also a window on where California is still growing — on our metropolitan edges, outside places like Fairfield, Riverside, and Escondido.

SMART opened in 2017, offering 43 miles of service from Marin’s San Rafael up to Sonoma’s Charles M. Schulz airport. It was built for peanuts — just $400 million. An extension south from San Rafael to the Larkspur ferry opened just before the pandemic hit, crushing demand for trains and ferries.

But ridership is rebounding. And SMART is working to expand. It’s adding a second Petaluma station and creating a micro-transit service to connect its airport station to the actual airport.

SMART has begun construction on an extension north to Windsor, though it’s paused that work while awaiting a California Supreme Court decision on the project’s funding. Eventually, SMART will take the train farther — to Cloverdale, on Mendocino County’s doorstep, 80 miles north of the Golden Gate Bridge.

And SMART has studied a new line east across the North Bay from its Novato-Hamilton station to the Interstate 80 corridor at Suisun City. There, SMART would share a station with Amtrak’s Capitol Corridor service, which connects the state capital and San Jose. A new east-west North Bay link can’t come soon enough. The state says California State Route 37, the area’s most popular east-west thoroughfare, could be “permanently submerged” by 2040 because of storms and rising sea levels.

With all these projects, SMART is seeking to serve both visitors to California, and Californians who may be less likely to live in the middle of our biggest cities, but still want to be connected to them. Indeed, transit projects like SMART and the ACE train, which runs through the Altamont corridor and is being extended south and east through Modesto to Merced, are helping to knit Northern California into what some wonks call “The Mega-Region.” That conception imagines the “Bay Area” reaching as far as Lake Tahoe or Fresno.

Of course, serving such a large area requires making smart links accessible to real people. At Larkspur, SMART has work to do.

The experience was mortifying because I had been bragging about SMART to my companion that day, a Swiss-Swedish journalist colleague. After decades of traveling the world by rail, he is a train snob, and he began making little jokes as soon as I turned left off the ferry, wandered to the edge of its parking lot — and couldn’t find the train. Unable to locate the platform using the navigation app on my balky smartphone, I started moving toward a tunnel used by bicyclists and pedestrians. Still no train.

Eventually we wandered to the right side of the parking lot, crossed busy Sir Francis Drake Boulevard, and meandered around a curve in a smaller street, through two office parking lots, and up a narrow driveway to reach the train station. On board, the ride was fine, though my European friend pressed a conductor on why the train runs on diesel, not electricity (the answer to the wisenheimer: to save money in an America that doesn’t invest much in trains).

The good news is that if my colleague ever comes back to the North Bay, the problem should be solved. After making some calls, I learned that SMART has repeatedly put up sandwich boards and posted signs to show the path from ferry to train and back — but these keep getting stolen or blown away by winds. As I write this, they’re enacting a more permanent solution: Vinyl decals will be applied to the pavement to mark the safest route.

These decals are called breadcrumbs, and you can follow them, slowly and carefully, to California’s future.