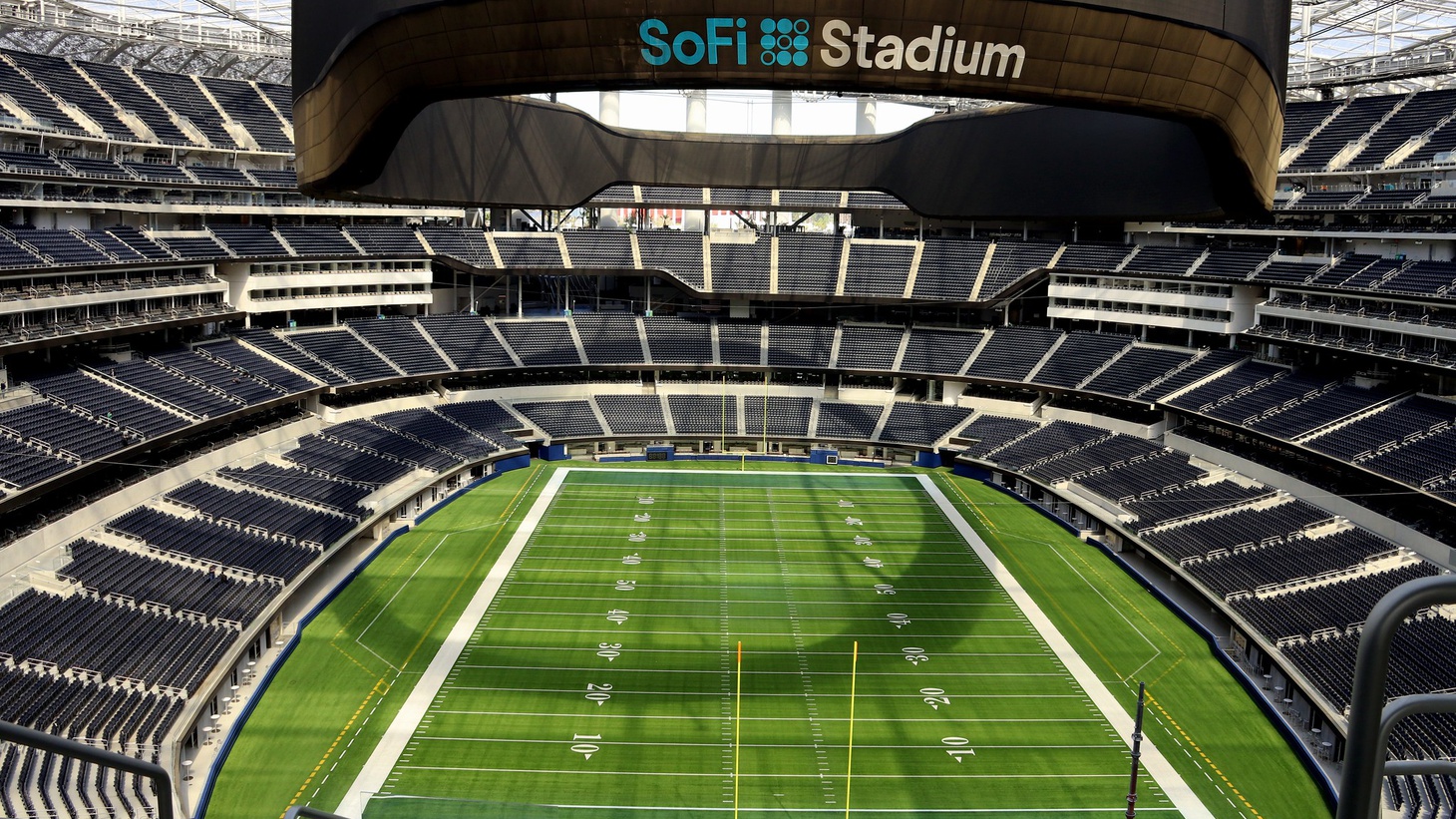 SoFi Stadium is getting ready for its national close-up. The Inglewood venue will host the LA Rams and the San Francisco 49ers this Sunday in pro football's NFC Championship. And two weeks later, it will be entertainment central as the setting for the biggest event in U.S. sports: the Super Bowl. Photo courtesy of SoFi Stadium.

SoFi Stadium cost $5 billion to build, and it’s got all the bells and whistles that an affluent football fan may desire. But Zócalo commentator Joe Mathews isn’t impressed. He says SoFi lacks the communal feel of venues like the LA Memorial Coliseum and the Rose Bowl.

On February 13, Inglewood’s SoFi Stadium, the most expensive sports venue ever built in the United States, will become the sixth California stadium to host the Super Bowl.

To look back on those stadiums — five remain open — is to take note of a fundamental change in a state known for mass entertainment. As California, like the Super Bowl, has grown grander and glitzier, it’s also become more exclusive and disconnected.

I grew up near the Rose Bowl, one of three California Super Bowl stadiums created a century ago, after the last great global pandemic. Stanford Stadium came first in 1921, then the Rose Bowl in 1922, and the LA Memorial Coliseum in 1923. All three still stand.

They also still represent the egalitarian ideals, if not the uglier realities, of their time. All three stadiums were big, simple bowls, each accommodating 85,000-plus members of California’s then-growing population. These ambitious arenas were meant to serve the state’s surging higher education sector and its football-centered college culture. But they also hosted major civic events, including presidential nomination acceptance speeches by Herbert Hoover (Stanford) and John Kennedy in 1960 (LA Coliseum).

Unlike today’s tall and bulky pro stadiums, these modest, low-slung, one-level buildings connect to their environments. Stanford Stadium is on campus, the LA Coliseum is in Exposition Park, and the Rose Bowl is framed by the San Gabriel Mountains and surrounded by a public recreation area.

All three have had 21st century renovations to reduce seating capacity and provide separate seating for the wealthy. Still, they are too charming and accommodating of average fans for today’s pro sports franchises, which prefer stadiums full of corporate suites to maximize revenue. This is why the Coliseum last hosted a Super Bowl in 1973, Stanford held just one in 1985, and the Rose Bowl hasn’t held one since 1993.

For a time, the National Football League turned to San Diego’s Jack Murphy Stadium. It hosted Super Bowls in 1988, 1998, and 2003. Then came under criticism from the local team, the San Diego Chargers, for being outdated. When San Diegans refused wisely to subsidize construction of a new stadium, the Chargers moved to LA to share the new SoFi with the Rams. In 2020, San Diego sold San Diego State University the place, which was demolished last year. It will be replaced with a huge multi-purpose development.

Now and going forward, California Super Bowls belong to two new high-tech, screen-filled stadiums. Neither is in our biggest cities because LA, San Francisco, San Diego, and Oakland don’t need to waste billions on pro sports franchises to draw economic activity. Instead, these stadiums are in smaller cities, like Santa Clara and Inglewood, that are desperate to attract attention in their large metro regions.

Unfortunately, both venues lack intimacy and often disappoint, not unlike California itself.

In Santa Clara, Levi’s Stadium was built in 2014 and hosted the Super Bowl in 2016, but it has been dogged by complaints about traffic, parking, and design. The 49ers and the city have fought legally and politically over the terms of the stadium deal with some local leaders expressing regrets about seeking the team in the first place.

In Inglewood, SoFi Stadium, like so many California mega-projects, was dogged by construction delays and cost overruns that doubled the price from $2.5 billion to $5 billion.

SoFi is so over-the-top that it can feel like parody. It has an expensive roof that’s unnecessary in Southern California, which has little rain. Its entrance and gathering spaces feel overly large as if the authoritarian regime that built them were trying to awe you into submission.

And while those century-old open bowls connected to your surroundings, SoFi is its own self-contained world — from your seat, you can only see pieces of the entertainment district being built around it. Reinforcing this separation, SoFi doesn’t have a stop on LA’s expanding Metro rail system.

So, you won’t find me anywhere near Inglewood on Super Bowl Sunday. I’ll watch the game on TV with vaccinated friends. But what I’m really looking forward to is riding my bike around the Rose Bowl that morning.