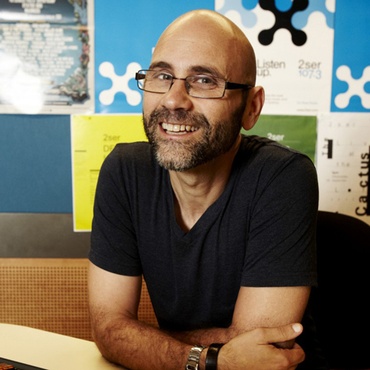 Lives and works in Sydney, Australia. Khedoori is a passionate curator and critic of new music from all corners of the world. In 2001 he co-founded independent label Preservation, which earned a devoted following through the release of searching and exploratory works. He currently curates the acclaimed Longform Editions. Khedoori was 2SER’s Music Director for over 15 years, presiding over the popular station’s eclectic music programming, broadcasting a dynamic schedule that gave acts like Gotye and Hermitude their first airplay. He is currently the manager of CBAA’s Amrap initiative where he oversees distribution of new Australian music to community radio stations nationwide, whose listenership and interest in new Australian music is at their highest levels ever. In 2020, Khedoori oversaw the launch of Amrap’s First Sounds initiative in collaboration with First Nations Media Australia, providing resources and pathways to airplay for First Nations music artists. Khedoori also works as a music advisor, writer and DJ, contributing to music and literary festivals and often appearing on radio including the ABC’s Radio National. He has interviewed hundreds of artists in a variety of contexts, including Kraftwerk, David Byrne, Joanna Newsom, Neneh Cherry and Henry Rollins. Rejuvenate yourself with dance floor fodder from Gorillaz, Phoenix, and more.

In need of some savory sounds to make your holiday week as smooth as possible? From acid-riffs to sweet soul, KCRW’s 5 Songs to Hear This Week has you covered. Is Dennis Kucinich the last Democrat for peace?

For 16 years the former Democrat congressman from Cleveland advocated for peaceful alternatives to the madness of war, but now members of his party in Congress are permitted only the… Panelists discuss the U.S. Customs and Border Protection’s change of leadership and reforming law enforcement agencies, the rise of antisemitism, and the politics of the World Cup. Fanatic! I hope the week was great. Engineer X and I have been working on the last of the November shows and are now pushing into December and beyond.