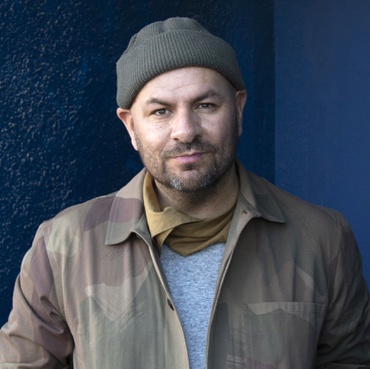 Anthony Valadez is a Los Angeles based DJ/Producer and visual artist with residencies at The Sayers Club in Hollywood and Zanzibar. He just wrapped up a 6 month long residency at THE SLS in Las Vegas in addition to holding a 3 year residency at The Natural History Museum. His latest musical projects include official remixes for David Bowie, Local Natives and Ozomatli in addition to 2 LP releases on Plug Research. He has had the honor of sharing the stage with the likes of Sly Stone, Ben Harper, Doug E Fresh, Prince, Bruno Mars, Novalima and more. Last year, Valadez was invited by Jennifer Lopez to open for her during her return concert in the Bronx. He can be found hosting his program on Monday nights on KCRW, Tuesday nights on Dash Radio and his weekly podcast on NTS Radio. Valadez is currently the host of Crate Diggers on Fuse TV's sister channel, FM.TV in addition to curating events across Los Angeles.

LA native Anthony Valadez became a music fan the minute he heard the opening notes of “Theme from Mahogany” by Diana Ross on the radio in the family car.

He was six years old and being denied the right to attend the Lakers Championship parade in DTLA. Despite the disappointment, he made a connection to music that would never be lost.

"The minute I heard that song and those strings I knew music was something I wanted to pursue. I wanted to share it, create it, document it and forever be a fan of it.”

He also worked at a local pool, saving money to buy turntables and, at night, would scan the FM dial for new music. It was then he discovered Michael Mixx’in Moor’s radio show on KCRW and became an instant fan of the station.

“There was nothing like it. It was a collage of sounds, speeches, soul and it was masterfully produced. I knew at the age of 14 I wanted to one day play records and create something different and new for LA on KCRW.”

In high school, he would skip 6th period and head over to local community college and do Guest DJ sets.

Then, while studying Theatre Arts at Cal State Northridge, he convinced KCSN (a classical station at the time) to allow an electronic/hip hop/world soul radio show on Monday nights which he hosted for several years.  He later created and hosted Soundwaves on 90.7 KPFK during Saturday afternoons.  A few years later, he finally landed a coveted spot at KCRW.

In addition to his Monday night (midnight to 3am) radio show, he is currently the resident DJ at First Fridays at The Natural History Museum. In addition, he can be found every week playing at Cana Rum Bar (DTLA), The Line Hotel (K Town), Zanzibar (Santa Monica), The Sayers Club (Hollywood) and Insert Coins (Las Vegas).

He has hosted events at the Hollywood Bowl, SXSW and CMJ, as well as at Grand Performances and UCLA Jazz Reggae Fest.

He has remixed songs by David Bowie, Ozomatli and Local Natives and released four studio albums of original material.

In 2011, Valadez was the official DJ for the Alma Awards, which celebrate the excellence and contributions of Latinos in the Entertainment Industry and is a segment host on NUVOtv’s The Collective powered by VEVO. The show is executive produced by Jennifer Lopez.

Lopez and her company, Nuyorican Productions, were so impressed with his DJ skills, they brought him out to open for her homecoming show at Orchard Park, Bronx NY in front of 16,000 attendees in May 2014.

He is a talented photographer and chronicles his travels, musical adventures and favorite new bands on his website: http://anthonyvaladez.org/ Anthony Valadez serves up an eclectic mix to help you ring in the New Year! Revered producer and pioneer of French Touch, Yuksek has paved his own way since the early 2000’s, as a hugely respected name in the dance world. A New Year and a new track from LA-based artist Sea Wolf (his first new music in four years!).

Jose Galvan takes a break from his January MBE hosting duties to cue up 3 tracks for you to put on repeat over the holiday weekend. José James is a beguiling singer-songwriter and producer who creates timeless music.

Jamie Strong, co-founder of Innovative Leisure Records, tells us about the label's origins and their big party this weekend at Pappy & Harriet's. Singer-songwriters Alex Siegel x Westerns team up for a relaxing mix of subtle keys and dreamy vocals on their latest track "Everything Turns." The latest tasty morsel from Aussie-based Dojo Cuts is an intoxicating and soulful mix, graced by Roxie Ray's vocals. "Rome" feels timeless, but took less than a day to put together!