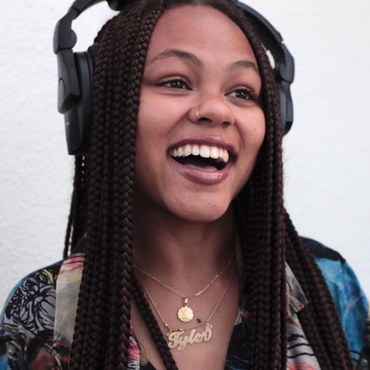 As a young girl, she was often found belting her little heart out to her Rugrats soundtrack CD or dancing in front of the television memorizing routines from Destiny's Child, Aaliyah, or TLC music videos. After she went through a pre-teen emo phase, her soul was saved by a newfound love of rock and roll and she began a journey of music discovery that widened her knowledge of music history and deepened her passion for music listening. She was that teenager who always had one headphone in.

If you ask her what her favorite band is, she would answer without hesitation, The Doors. Jim Morrison's poetry, Ray Manzarek's haunting melodies, Robby Krieger's spellbinding strumming, John Densmore's jazzy beats continue to mystify her to this day.

When Tyler went to Boston University to study Journalism, her ears opened to a world of new sounds. She became close with musicians studying at Berklee College of Music, regularly attended basement shows and became immersed in the local indie rock scene. She linked up with the local music publication Allston Pudding and began working with the Video Director to shoot live-sessions, interviews with touring musicians, and concert videos. She started DJing in college for the university radio station on a weekly variety music program. The stars aligned that first time she sat behind the board and spoke into the microphone.

And that's when she knew what she really wanted to do with her life: share music and tell stories. She moved back to Los Angeles after college and began interning at KCRW. She grew from a Summer Marketing Intern, to a weekly front desk volunteer, to an in-studio production assistant within months, and eventually became the Volunteer/Intern Manager. She worked on the team full-time for 4 years, and left in 2020 to pursue her creative passions and commit more time to organizing for Black liberation.

She returned to radio in 2021, producing and reporting for Move The Crowd, a weekly call-to-action program hosted by Dr. Melina Abdullah, and hosting a weekly music program titled The Deep End, both for KPFK-FM. Tyler is proud to be back at KCRW, which she considers her radio home and music community.

You can often catch Tyler at a show, dancing in the crowd or in the pit, in the streets protesting against police brutality, or on the airwaves playing you her latest favorites. Aug. 3 from FREAKS ONLY Aug. 2 from FREAKS ONLY