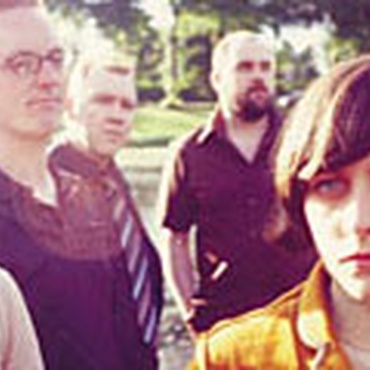 A Brief History of Camera Obscura
Camera Obscura began in 1996. Tracyanne Campbell, Gavin Dunbar and John started playing together in Gavin's parent's cellar with no drummer. They were soon joined by a guitarist named David Skirving.

Richard Colburn took on drum duties live with the band and played on the 'Your Sound' single until Lee joined the band in 2000. During this time they played live shows at Glasgow's 13th Note, Hyndland Church Hall, Nice n' Sleazy's, King Tut's. They also supported Snow Patrol in the Maryhill Community Central Halls and played at the Bowlie Weekender in Camber Sands. David left the band to work on his own, (forming California Snow Story) and was replaced by Kenny. Lindsay Boyd (of Andmoresound) joined on keyboards.

During 2000 they recorded their debut album, 'Biggest Bluest Hi Fi' in Cava studios, producing the record themselves with Geoff Allen engineering. The single 'Eighties Fan’ was produced by Stuart Murdoch. These records were released in the UK in 2001 and received airplay from John Peel and The Evening Session on Radio 1. ‘Biggest Bluest Hi Fi’ was 'Album of the week' on XFM and in the Rough Trade shop. It went on to become Prime Distribution's best selling independent album. 'Biggest Bluest Hi Fi' was also released in Spain (Elefant Records), Japan (Quattro) and Australia (Gifted).

The band did some UK live shows in 2001 along with their first session for John Peel on Radio 1. Lindsay left the band and was replaced by Carey and they rounded off the year playing live from Peel Acres for John Peel’s Christmas show. 'Eighties Fan' was Number 8 in Peel's Festive 50. In 2002, the band played the Primavera Sound festival in Barcelona, Track & Field's 'Pow to the People' Easter festival in London and the Chickfactor 10th Anniversary 'Black and White Ball' in London's Bush halls. This was followed by their first Spanish Tour. On their return from Spain, work began on the follow-up to 'Biggest Bluest Hi Fi', once again in Cava studios with Geoff Allen engineering and co-producing with the band. Nigel, who had played trumpet as a session musician on BBHF, and who had also been playing live, joined the band full time.

2003 saw Camera Obscura preparing for the release of the new album, 'Underachievers Please Try Harder' and single, 'Teenager' with a couple of Glasgow shows, playing in Hyndland Church Hall with The Ladybug Tranistor, and in Nice'N'Sleazy's for a Big Issue benefit show. The band also played at Spain’s Benicassim Festival in 2003 alongside artists such as Beck and Donovan. The album was released by Elefant Records after the band left Andmoresound. Following its release, the band embarked upon their first proper tour of the UK and Ireland. The tour ended with one final recorded Peel session. One more single, Keep It Clean, was released. It became one of two entries into the Peel Festive 50, along with the album track 'Suspended From Class'.

2004 was a very eventful year for the band. They were invited to play live on Radio 1 from John Peel's house. For this, their third visit to Peel Acres, they were asked to put music to the words of Scotland's National Poet, Robert (Rabbie) Burns. The band came up with five songs, one of which was a version of 'Of A' The Airts the Wind Can Blaw', also known as 'I Love My Jean'. The show was broadcast a few days before Burns' Night in January and the band shared haggis, whisky and stories with John afterwards. The band were so happy with the results of this experiment that they went into the studio and recorded two of the songs.

With growing interest in the band coming from America, Elefant released Underachievers there, licensing it to the much-revered Merge Records label. The band undertook their first tour of the States and Canada in July and August, playing as far afield as San Diego in California, Montreal in Quebec and Athens, Georgia. A huge journey... A few weeks after their return to the UK, Camera Obscura played one more live show. It was a private concert- the 65th birthday party of their most enthusiastic supporter, John Peel. Sadly, the great man died that October. That concert also saw the last live appearance of John Henderson, and the band became a six-piece again. Writing commenced for album three.

In 2005, work on their next record continued. The band released 'I Love My Jean' as a tribute to John Peel, and it resulted in their first Independent Chart entry. The band was also given the opportunity to try out the new reduced line-up with three shows. First was the South Pop Festival in Seville. Then the band travelled to Sweden for two shows in Stockholm and Uppsala, making new friends along the way.

In May of 2006 "Lloyd, I'm ready to be heartbroken" is the first single to be taken from the band's new album, "Let's get out of this country". Recorded and mixed in several studios in Sweden , this was produced by Jari Haapalainen, producer behind such gems as The Concretes and Ed Harcourt. Scotland-based Camera Obscura perform songs from their uplifting release My Maudlin Career on Morning Becomes Eclectic at 11:15am. May. 9 from José Galván May. 9 from Jeremy Sole May. 13 from KCRW’s Global Beat