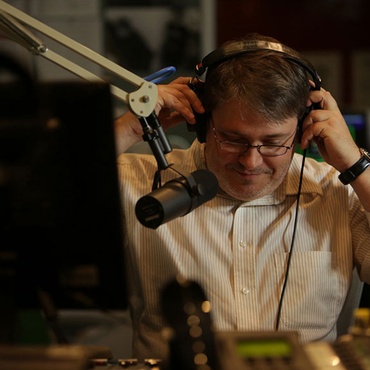 "I was born in Indiana, but moved out to Los Angeles with my folks when I was nine, thus accounting for my homespun charm combined with an over-cultured mind. I was kind of a late bloomer when it came to music, never learning to play an instrument or anything like that, but once I caught the bug, I dived in head-first. The first concert I attended was Thomas Dolby at the Greek Theatre, but my second was the Meat Puppets at McCabe's Guitar Shop, and by then, anything was fair game. Throughout high school, Talking Heads were my absolute favorites, but since then the Fall have overtaken them in my affections. Over the years, I've been lucky enough to see performances from folks like John Cage, Miles Davis, Dizzy Gillespie, Beck (in his acoustic folk mode), Public Image Ltd., the Durutti Column, Julian Cope, Laibach, the Blue Nile, the Wedding Present, Cheap Trick, Kraftwerk, Kevin Ayers, Radiohead, the Sea & Cake, the Coctails, Roy Harper and, of course, the Fall.

While attending UCLA, I worked at their little-heard student-run radio station, KLA. Over my years there I worked as DJ, sports guy, ticket giveaway guy, music director, general manager and even game show host. I got my degree in English Literature (a subject still close to my heart), I have also done a fair bit of journalism, writing calendar entries for the New Times, serving as music editor for the magazine Caffeine, and contributing to the guidebook MusicHound Jazz. I never really anticipated having a career in radio, but I always enjoyed listening to KCRW, so I became a volunteer here in 1993. Since then I have worked as a music department volunteer, ticket giveaway guy (again!!!), assistant music librarian, substitute DJ and, now, host of my very own program, heard every Monday night at midnight.

I've had the pleasure to work here at KCRW, bringing my admittedly esoteric tastes to the airwaves. I enjoy hearing your feedback. And for crimony's sake, be an active music listener! Music is too good to let simply wash over you -- engage it and it will reveal many unexpected treats." Saturday marks author Ray Bradbury’s 100th birthday. He moved with his family to LA when he was 14 and attended Los Angeles High School in Mid-City. By a quirk of redistricting, no one who lives in Monterey represents the county in Sacramento. Commentator Joe Mathews says that’s evidence our districts are way too big. California can be a real alternative republic that shows real freedom What happens when 2 LA schools share the same campus?

Because of “co-location,” a public school and a charter school in LA are sharing the same space. It’s happening district-wide, and few seem happy about it. LAX-worthy? Who would you make the trek for?

Is driving someone to LAX the ultimate act of Angeleno love? Tell us your thoughts.