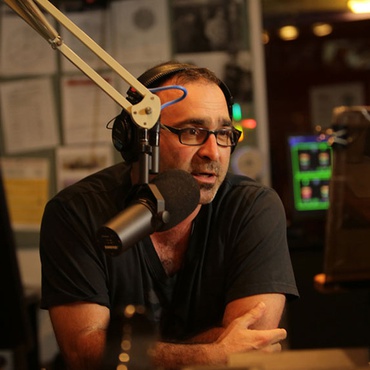 For the last 20 years Jason Kramer has been in the field of music and radio. After changing his career as a medic in the hard streets of LA for ten years, he decided to work in radio starting in 1992 on KLOS, screening calls for the widely popular "Seventh Day". From that point on, Jason realized that music and radio was his calling.

During his transition, he starting off with a stint working for SoCal favorites Sublime and their label Skunk Records. In 1996, he moved on to Fox Sports TV as their full-time music supervisor for 6 years, which also led him as a show producer on Fox Sports Radio. He has also worked in various other aspects of music including management, radio DJ, publishing, creative consulting, music photography and continues to work presently as a commercial concept music supervisor for the prestigious music company, Elias Arts.

Jason, whose music collection started when he was given copies of Magical Mystery Tour and Exodus at age eight, is also sharing his music knowledge with local high school students. He has been a mentor for the Hamilton High Music Academy in a program through Fox Music and the Grammy Foundation.

Jason started off as a KCRW volunteer in the mid 90's and has been on air since 1997 during a show called The Lab(3am to 6am Sat nights). Today Jason takes the reins of his new program every Tuesday night 12 midnight to 3am giving you, the listener, a very special unique musical adventure. May. 15 from Jason Kramer May. 8 from Jason Kramer May. 1 from Jason Kramer Thanks to the folks at Real Gone Music , the classic 1963 exotica LP “The Soul of The Drums,” from the inventor of the genre Lex Baxter and his orchestra, is back! May. 15 from Chris Douridas Milwaukee sisters Vic Banuelos and Gabby Banuelos, known as REYNA, are on the rise as they produce an eletro-poppy, ‘80s-inspired Spanglish track called “Orgullosa.” May. 12 from Tyler Boudreaux Angel Olsen: ‘All The Good Times’

Loss has long been a theme in Angel Olsen’s work, though her forthcoming album “Big Time,” out June 3rd, turns to the far-reaching capacity of new love, written during the time of… Orange County-based, Vietnamese-American producer and multi-instrumentalist kelz delivers the soothing musical balm “My Friend,” which she considers her magnum opus turning loss into… May. 11 from FREAKS ONLY May. 16 from Tyler Boudreaux