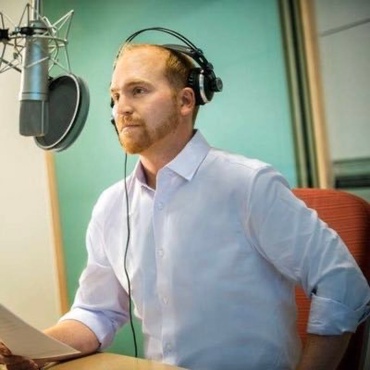 Award-winning journalist Jeremy Hobson is the former host of NPR’s Here & Now, which he helped grow into public radio’s top midday news program, tripling the audience to more than five million in just a few years.  On Here & Now, he held political and business leaders to account, and interviewed musicians, actors, scientists, historians, journalists, and others with the ultimate goal of informing and enlightening his audience and connecting the news to them.

At the age of 28, he became the youngest national host in public radio’s history, anchoring the Marketplace Morning Report, the most-listened-to business program in America. As host, he interviewed some of the titans of business including Warren Buffett, Bill and Melinda Gates, and Richard Branson.

Hobson has reported extensively from the field, including Brexit coverage in the UK, immigration coverage in Mexico, and live broadcasts from more than 20 states.  He hosted Here & Now from a porch in front of Old Faithful to celebrate the 100th birthday of the National Park Service, and reported from Ferguson, Missouri following the police killing of Michael Brown.

Hobson’s journalism is strengthened by his background as a reporter and producer. He was the lead Wall Street reporter for Marketplace during the 2008 financial crisis and covered the aftermath of Hurricane Sandy in New York in 2012. In 2003, he worked with NPR’s Guy Raz in Turkey as the Iraq War began.

Hobson's decades-long broadcasting career began at the age of nine when he started contributing to a program called Treehouse Radio in his hometown of Urbana, Illinois. The cannabis industry entered 2021 on a high note. Did that optimism hold through the year and what can we expect in 2022? Language, style, and Machiavelli for women

Despite increasing attention to equity, diversity, and inclusivity, the pay gap for women has not shifted much over the last 15 years.