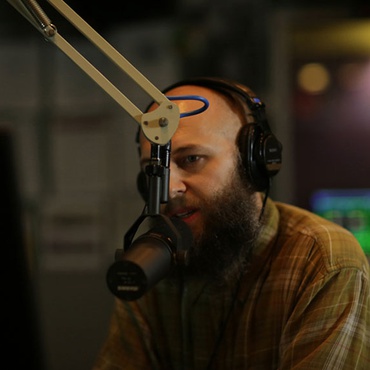 Jeremy Sole’s upbringing was seeped in the rich Chicago history of Blues, Jazz, Disco, Salsa and Soul - and he reveled in that space where they all blend together. As a teenager, Sole threw loft parties that were a culture clash during the birth of Hip Hop and House music. His obsession grew to include music from every corner of the world and, in 2001, Sole moved to LA. With a broad musical palette, he felt right at home in the spiciest melting pot in the country.

In April 2006, Sole was in the studio working with Ms. Lauryn Hill. After hearing him mix, she asked if he had ever considered getting into radio, "...because this is the music the people need to hear”. Months later, KCRW called to ask him that same question, and since then you can hear him Wednesdays from 12-3am on 89.9FM and KCRW.com.

Jeremy has had the honor of sharing the stage and studio with hundreds of his inspirations; Roy Ayers, Ben Harper, Tony Allen, DJ Shadow, Stevie Wonder, Chaka Khan, Seu Jorge, Antibalas, Fat Freddy's Drop, Parliament, Quantic, Joe Bataan, and many more. He was the last DJ to open for Ray Charles, mixed songs for Sly Stone's birthday party, and was deejaying the California Democratic Party's Election Night event, with over 10,000 people in attendance, when Obama officially became the 44th President.

Sole has also put his special touch on remixes for Femi Kuti, David Bowie, Thievery Corporation, Quantic, Jazzanova and is incessantly cooking up a new batch.

He is also a major force in Los Angeles nightlife. Drawing a loyal crowd to Zanzibar in Santa Monica for over 8 years, Sole’s Thursday night residency Afro Funké is his arena for Afrobeat, Latin, Brazilian and other authentic and remixed world rhythms. Hundreds of international guests have joined in, from deejays Rich Medina and Cut Chemist to impromptu jam sessions with Zap Mama and Stevie Wonder. He also returned to his underground roots for a monthly series called theLIFT, with partner Eric "Wiseacre" Tucker. theLIFT takes place in a constantly changing undisclosed location in LA.

Sole also leads a 9-piece live ensemble called Musaics, which includes members of The Lions, Quantic Soul Orchestra, Mayer Hawthorne and Build an Ark. Miguel Atwood-Ferguson plays violin, and Todd Simon leads the horn section on trumpet. Jeremy himself is on turntables and guitar - sampling ethnic percussion and sounds from vintage records, writing live arrangements, and juxtaposing it all as musical mosaics, or "Musaics".  It's an experimental-yet-steady sound that hybridizes elements of Afrobeat, Cumbia, Spiritual Jazz and dubbed-out dancefloor beats. Do you like Brandi Carlile? How about Yola? Well, both artists are championing Nashville-based Allison Russell.