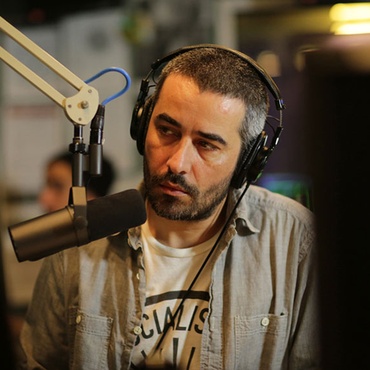 Mathieu Schreyer (aka Mr French) was born in France and moved around the world with his parents, living in North Africa, the Middle East and in Asia before settling down in Los Angeles.

"I came to visit my sister in 1995 and I never left. I had been collecting records for about five years at that point and I started casually spinning in restaurants and at parties for friends."

Next thing you know, I'm spinning corporate events for Nike and Vanity Fair and a bunch of celebrity parties."

A shot at a modeling career helped him get his visa and pay the bills, but music was the reason Mathieu made LA his permanent home. His first KCRW connection was through Garth Trinidad. For five years, the two DJ's shared a residency at Zanzibar in Santa Monica on Sunday nights called "One Way," and when a slot opened up on KCRW, Mathieu submitted a demo, focusing on international and eclectic music and sharing the soundtrack to his life.

"What I play depends on my mood, what I've been going through that week. My shows are a meaningful journey with ups and downs and lows and highs, like what you experience in life."

"There will always be a blend of Jazz, Latin, Brazilian, African, Soul, Funk, Reggae, Electronica, Folk, Hip-Hop and plenty of oddities like weird soundtracks and library records…I am into so many different kinds of music. What I am really looking for in music is a feeling, and I am able to find it in all those genres."

The first thing Mathieu ever purchased himself (with money from the tooth fairy) was a tape by the French artist, Renaud. He started snatching 45's from his siblings -- Madonna, Prince, Michael Jackson – and playing them for friends on his Fisher-Price turntable. He was introduced to more sophisticated music as a teenager and the new experience was mind-blowing.

"It was amazing and really opened my mind. Since then, I've craved that feeling of being touched by something new as I've gotten deeper and deeper into music."

Now established in LA, he holds down DJ residencies at two LA hotspots, Bar Marmont and The Edison Downtown. He's also produced music for a few projects and had the chance to work with artists such as Tricky, N'Dea Davenport, Spacek, Syreeta, Chali 2na, and Leon Ware (Marvin Gaye). He's also done remixes for Les Nubians, Talib Kweli, Dwele, Yusef Lateef and Michel Gondry's Human Nature soundtrack. He is also a fashion designer with a t-shirt line called Unknown Soldier that is available at stores in both the U.S. and Paris, as well as online.

Exploring the world's music from yesterday to tomorrow. Mathieu Schreyer explores the world's music from yesterday to tomorrow. Check out my tribute for the late Tony Allen. Let’s welcome newcomers Pearl & The Oysters, who settled in Los Angeles in 2020 full of hope for the future of their band. When actor, writer, and producer Kumail Nanjiani was 18, he moved from Karachi, Pakistan - a city of more than 9 million people - to the United States to attend Grinnell College , a…

Dec. 2 from The Business Andy Shauf: ‘Wasted On You’ Dec. 8 from FREAKS ONLY Ben Harper: ‘Where Did We Go Wrong’

“Bloodline Maintenance,” the 17th album by SoCal favorite Ben Harper, was inspired by the influence and loss of his father.