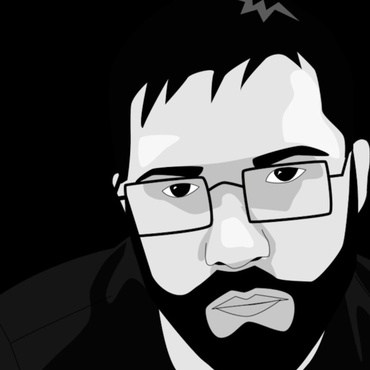 Ryan Scammell’s favorite thing is probably having his back scratched.  He's also a huge fan of dumplings.  If he were on death row, dumplings would probably be the way to go.  Though mathematically he recognizes that he's probably eaten more bacon egg and cheese sandwiches in his life than anything else, which calls into question how one defines "favorite."  So if it were a numbers thing, empirically, bacon egg and cheeses should be his favorite, but taken side by side, it's probable that he'd choose the dumplings.  Also, professionally, he's a projection designer and animator.  He just finished a feature film called "Immune: The Origin of Ryan Scammell Superhero (approximately 72% nonfiction)" the title of which he feels is equally tongue-in-cheek and clever and completely idiotic and narcissistic.  This picture is what he looks like as a cartoon.  He also produces (though infrequently updates) a podcast called Phonography: Writing In Sound which is available on itunes or online at www.writinginsound.com.  He's written for some literary magazines too.  And he lives in Brooklyn. Much like a radio listener, a blind person has to rely a lot on their sense of hearing. But once you learn to hear with your whole body...