Etgar Keret: Suddenly, A Knock on the Door Suddenly, A Knock on the Door, translated from the Hebrew by Nathan Englander, Miriam Schlesinger and Sondra Silverston (Farrar, Straus & Giroux)
The Israeli writer's short, explosive and funny short stories voyage into the fantastic where a goldfish talks and a hit man is reincarnated as Winnie the Pooh. Etgar Keret says Israeli identity is not only ancient and traditional but also modern and chaotic. To capture its texture these stories are infused with current slang developed from ancient Hebrew and a polyglot of influences: Russian, Arabic and Yiddish.

Read an excerpt from Suddenly, A Knock on the Door. 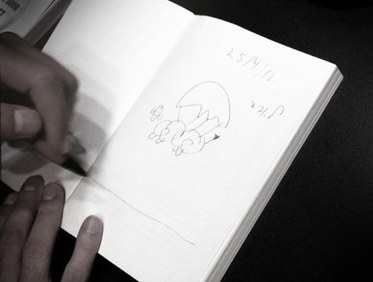 Keret signs a copy of his new book for Michael.

Etgar Keret: Suddenly, A Knock on the Door