A Richard Serra sculpture is a focal point in Morphosis' design for OCMA. Rendering courtesy Morphosis.

This week: Watch the topping out at the new OC Museum of Art by Morphosis Architects; hear from developers and planners about facing up to systemic racism in planning; learn about creativity across disciplines; check out how it will feel to walk around the new LACMA; see new works by Rodney McMillian and Andres Serrano. 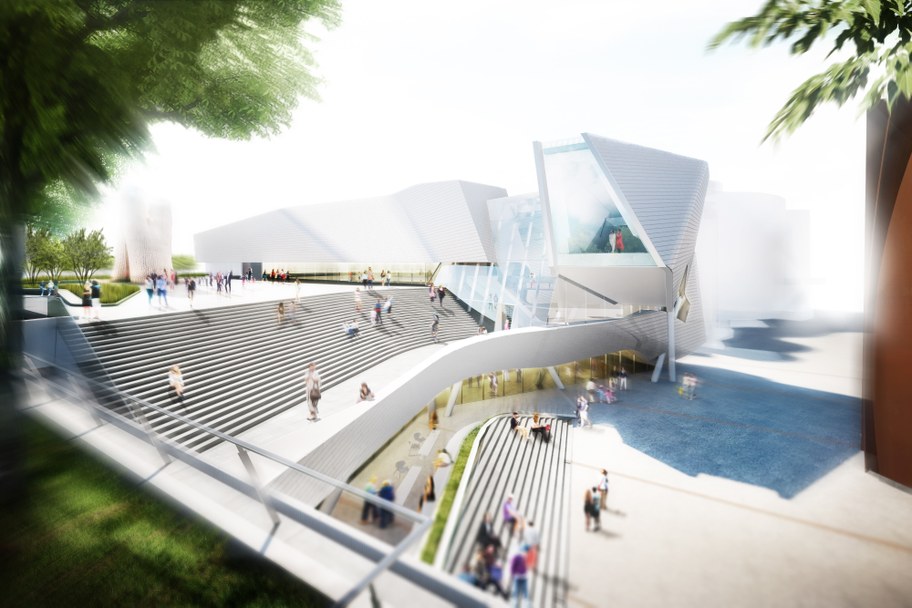 Rendering of the exterior of the new Orange County Museum of Art. Courtesy Morphosis

1) Topping Out at OCMA by Morphosis

There's been so much talk about LACMA (see below) it's easy to forget there is another art museum getting a new building and that is the Orange County Museum of Art, designed by Thom Mayne and his firm Morphosis. It will celebrate its topping out with a ceremony Tuesday. Virtual viewers can witness the placement of the final structural beam.

The new 52,000-square-foot museum will join the complex of buildings that forms the Segerstrom Center for the Arts in Costa Mesa. A big feature of the design is the 10,000 square feet of outdoor space, shown above, for education programs, performances, and public gatherings. Learn more about the project on this past DnA segment. And check out the construction time lapse here. 2) ULI LA State of the City 3.0 - Real Estate and Land-Use Policies That Have Divided Los Angeles 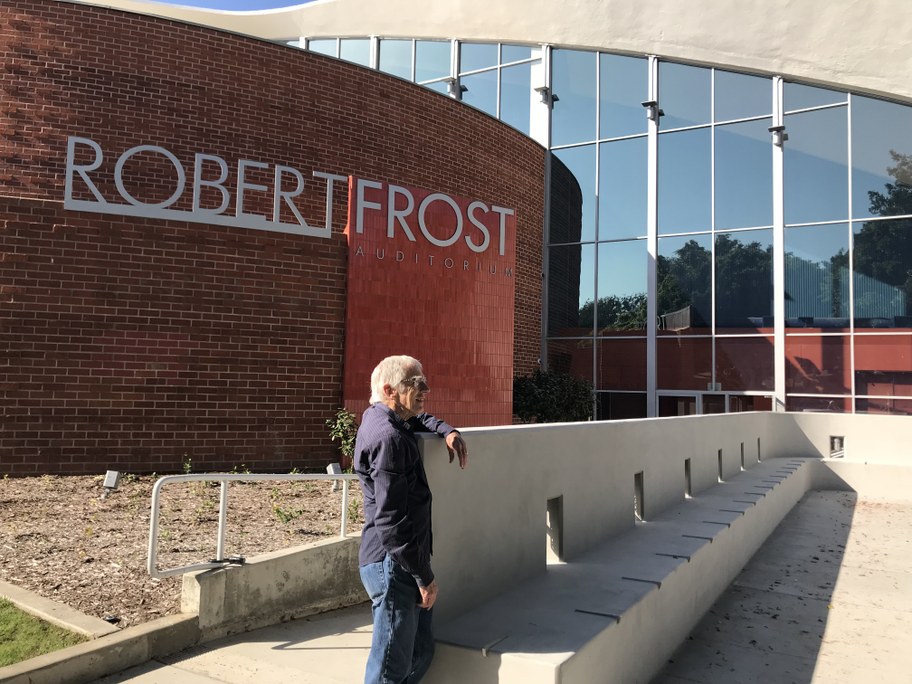 Craig Hodgetts stands at the entrance to the Robert Frost Auditorium at Culver City High School. He and partner Ming Fung renovated and adapted the auditorium building.

When Craig Hodgetts opens his mouth interesting observations usually come out of it. The architect and automotive design afficionado will moderate a conversation Tuesday about blurring boundaries in design. It's part of a two-day Creativity Conference, organized by AIA/LA's Interior Architecture committee. Hodgetts will talk with vocalist and songwriter Mayssa Karaa and curator Tessa Papas about how they approach creativity. On Wednesday Stanley Felderman and Nancy Keatinge of Felderman Keatinge + Associates will continue the cross-disciplinary conversation when they talk with textile artist Sarah Wertzberger and filmmaker Skinner Myers. 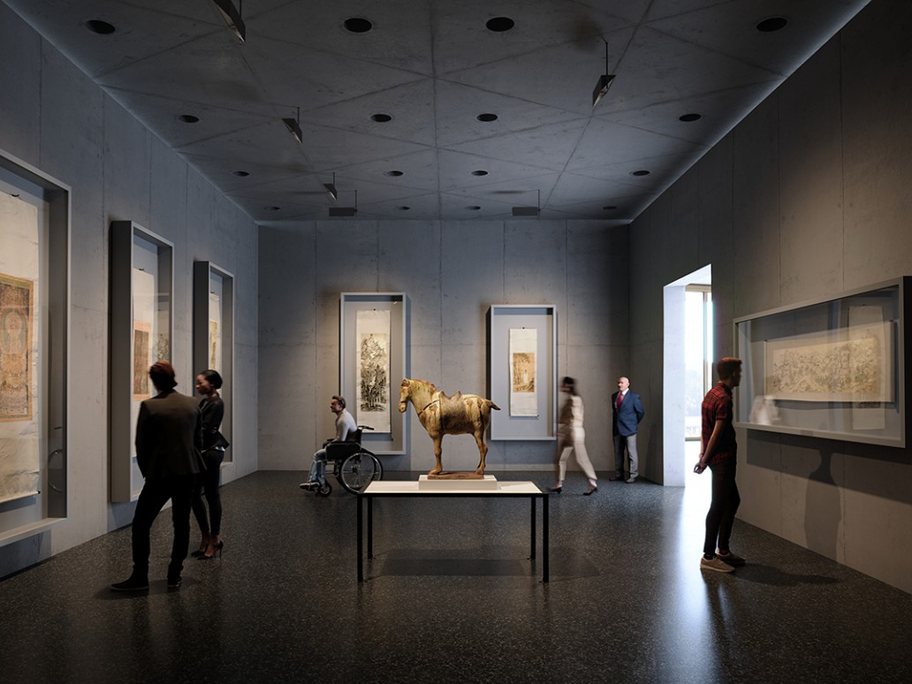 While many of us have been sheltering in place, LACMA has been busy, almost completing demolition of four buildings to make way for the new home for the permanent collection designed by Peter Zumthor.

As many who follow LA architecture are aware, critics and public have been divided over the project, now named David Geffen Galleries. One of the disputes is over its break from traditional ways of displaying an encyclopedic collection. Museums once displayed their permanent holdings in grand rooms ordered by epoch or geographic location or style. This is considered by a new generation of curators to be an outmoded, Western and hierarchical way to show art and artefacts. Instead, LACMA's goal is to be non-hierarchical; curators are invited to mix and mingle objects "across media, across time" in themed, temporary exhibitions spread through galleries that do not conform to a linear journey. The idea is that this is more democratic and that the narrative can be "richer and more textured." That's according to curators interviewed for a series of promotional videos released by the museum to get people excited about the project. Get more on the latest at LACMA in this DnA interview on Press Play. 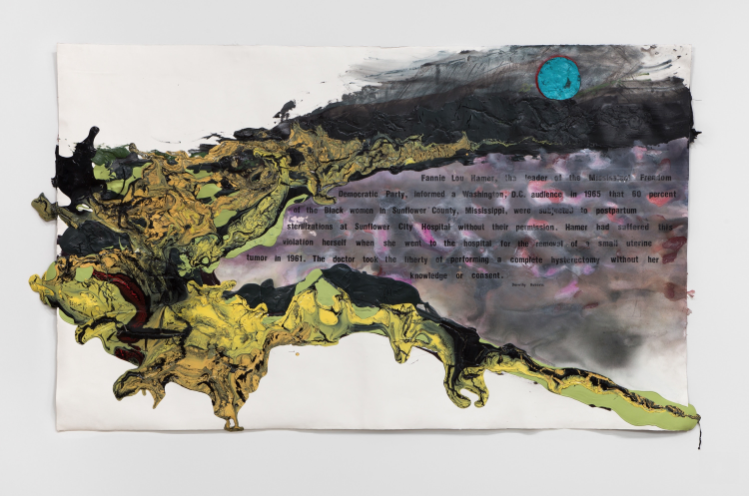 Rodney McMillian, Mississippi Appendectomy, 2020. This references the postpartum sterilizations given to 60% of Black women in Sunflower County, Mississippi, reported Fannie Lou Hamer, the leader of the Mississippi Freedom Democratic Party, in 1965.

Two artists who have created visceral explorations of the Black condition in America have work on show that can be visited in person, by appointment.

Rodney McMillian, Professor of Sculpture at the UCLA School of Arts and Architecture, has a new exhibition entitled Body Politic at Vielmetter Los Angeles. He describes his work as an exploration of "the complex and fraught connections between history and contemporary culture, not only as they are expressed in American politics, but also as they are manifest in American modernist art traditions." Body Politic will include a new monumental work in vinyl, The White House Painting, II, 2018-2020 made from the remnants of The White House Painting made for his Booth Prize exhibition in Austin, TX. Several works in the exhibition are said to "continue his investigation of the social and political factors that inform our understanding of the body’s symbolic meanings." McMillian’s work will be on view in several museums this fall.

Meanwhile, Neuehouse Hollywood has teamed up with LAXART Director Hamza Walker to mount "Infamous," a show of photographs by artist-provocateur Andres Serrano of race-based and racist memorabilia he has been collecting: a Klansman’s hood, a death camp photograph, or a set of fishing lures adorned with the miniature heads of blackface characters.

When: Body Politic: By appointment only, Tuesday – Saturday from 12 – 6pm/Infamous; Through Tuesday, October 6th, at time slots from 11am - 2pm and 4pm - 7pm