Orange County Museum of Art closed its doors this weekend in Newport Beach.

It will now move to a temporary location in South Coast Plaza Village in Santa Ana.

Next year it will break ground on a permanent home at the Segerstrom Center for the Arts in Costa Mesa. 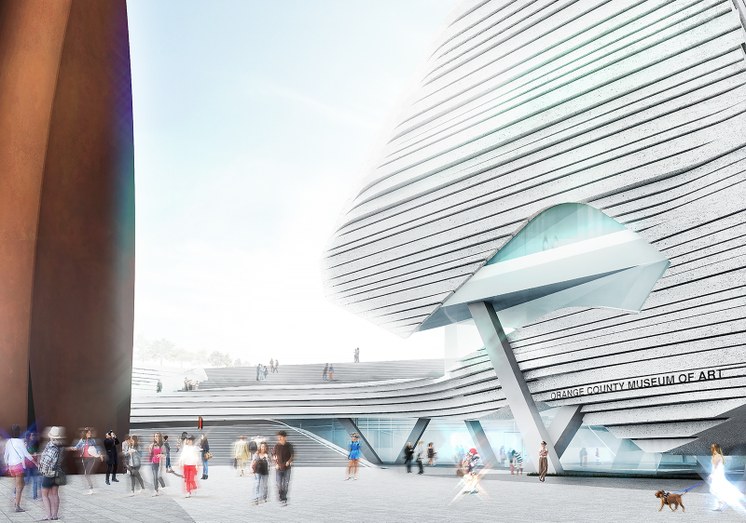 A rendering showing the entrance to the new Orange County Museum of Art, with Richard Serra’s “Connector” sculpture seen to the left.

The 52,000-square-foot building will sit on a space between the wavy glass Renée and Henry Segerstrom Concert Hall, designed by architect Cesar Pelli, and the Segerstrom Hall that was designed by Charles Lawrence.

This design by Thom Mayne and his firm Morphosis is the third iteration after working with the museum for ten years. It builds on several decades of embattled efforts by OCMA to expand.

Mayne and his team have designed buildings all over the world, among them, in LA: Caltrans District 7 Headquarters in downtown LA, Emerson College on Sunset and Diamond Ranch High School in Pomona.

The designs demand attention. They tend to be severe and industrial but oddly beautiful, often made of thrusting concrete or steel with decorative metal skins and a sense of barely-contained energy.

The goal in OC though, says Thom Mayne, was not to do another architectural icon.

“True or not, we're seen as somewhat aggressive, kind of strong architects,” says Mayne, adding “we came out very early saying we don't want to do another object in a series of objects.”

But this is his first art museum. He’s had around five near-misses -- and that includes being shortlisted for the LACMA expansion that was proposed back in 2001.

He’s been eager to build one for a long time.

“The museum is a challenge at this time in history in terms of the definition of an architectural response to it, to a museum of art,” Mayne said.

But it is the architectural responses that sometimes worry art lovers, like Carolina Miranda, staff writer at the Los Angeles Times.

“I was a little concerned when I heard that Mayne was the architect because Mayne is a big brash form maker and... designing a museum, sometimes the architect has to check the ego in at the door,” she said.

As it turns out, Miranda -- who knows Orange County well, having attended high school in Irvine -- “was impressed with his design, in the sense that it's quite a simple design. It's not going to be a huge museum. The galleries have you know these basic rectilinear proportions and they're very flexible,” she said. “And he's designed this incredible staircase that goes on the outside of it. And all of it is centered around a Richard Serra sculpture that is currently already at the site, and is really trying to create this public space that doesn't really exist in that area currently.”

Miranda is referring to Richard Serra’s epic sixty-six-foot high sculpture, called “Connector.” It’s made of five rusting steel plates that curve and torque towards the sky.

“We literally tipped our hat at the Serra piece. It became you can say the generator for the whole urban idea,” explains Mayne. He describes the building as a kind of landmass, inspired by land artists like Robert Smithson and Michael Heizer, that is “stratified horizontally. It's a series of horizontal layers which are very kind of geological like the Earth layers but that horizontality is also meant to exaggerate the vertical nature of the Connector because, the way the building bends in and with the stair, we literally give you the space of contemplation with this thing in front of you.”

The result is a kind of futuristic version of a Mediterranean public square and campanile -- in which the Serra artwork is the bell tower.

This got us thinking about how every contemporary art museum these days has to have one of Serra’s powerful coiled, rusting corten steel sculptures.

But they are not always integrated so directly into the architecture.

“I do think his work is interesting especially on the material level and the engineering level,” Miranda said, “but he's just become one of those artists for collectors. And so a lot of museums and public spaces end up with them because collectors acquire acquire them and donate them.”

“And because the museum design has been so long in coming that Serra has always felt kind of abandoned there. And so I'm glad to see Mayne giving it that attention because it shows an engagement not just with the buildings and the urbanism of that area, but with the art.”

Some reporters have queried how the museum will pay for its new building. After all, says Miranda, OCMA still needs to build up its endowment.

The board says they’ve raised a portion of the costs through selling their property in Fashion Island and now they are entering the “silent phase” of their capital campaign to raise the rest.

So, does the new building warrant the expenditure?

“It could be really great. It could not work. And so I think he's trying to inject a little bit of that in it, of this place that could be a little bit spontaneous. And I think Orange County desperately needs that,” Miranda said.

Orange County Museum of Art closed its doors this weekend in Newport Beach. It will now move to a temporary location in South Coast Plaza Village in Santa Ana.

Anyone with kids knows that they come with a lot of… stuff. “From the first minute you have a child you have to buy all of these new things to accommodate your child:...