Metro is spending an estimated $120 billion in the coming decades on building out rail lines and improving bus service.

And yet ridership on mass transit is continuing a steady decline dating back to 2014, with the biggest drop in bus ridership at around 20 percent. Meanwhile, it is estimated that 100,000 cars are joining LA's jammed roads each year.

If traffic is getting worse, why aren't people taking public transit?

The drop has been attributed to a number of factors.

They include the rise of ride-sharing services, access to drivers licenses for undocumented immigrants, a drop in gas prices, and riders concerns with the buses, ranging from spotty service and too many transfers to uncomfortable seats and lack of safety.

To stem the flow Metro has embarked on a study into what taxpayers want from their service.

But it is also looking to Angelenos for ideas.

And Angelenos are not short on them. Mobility, or the lack of it, has brought forth innovation from individuals and from private companies--some with formal support and some outside the system.

Take, for example, Bird scooters. Out of the blue this VC-funded company, helmed by an Uber alumnus named Travis VanderZanden, launched a shareable electric scooter service onto the streets of Santa Monica.

It’s giving the City headaches because Bird has skirted rules and regulations but the fact is people took to this innovation like proverbial ducks to water.

And that’s in part because riding these scooters is a fun way to traverse a few of the Southland’s lengthy blocks -- and because it presents a solution to one of the major challenges faced by Metro: the first mile/last mile, or how to get people from home or work to the bus or train.

Then of course you have Elon Musk and his ideas for the Hyperloop and now the "Loop," a high speed underground public transportation system that would transport up to 16 passengers in a mass transit "pod" or a solo driver in a single-use "electric skate" vertically and horizontally at speeds of up to 150 miles per hour.

His Boring Company has started drilling underground his headquarters in Hawthorne but now they are seeking support from neighboring cities.

This past Monday a team of young staffers from the Boring Company pitched the company’s concept to Culver City’s City Council, in hope of getting the city’s support for them to drill a 6.5-mile "proof of concept" stretch of tunnel in Culver City.

The idea had the gee-whiz quality of Musk’s Hyperloop.

Imagine, said Jehn Balajadia, the building company operations coordinator for the Boring Company, “being able to get from Sawtelle to downtown L.A. in four minutes or from there to Long Beach in less than 10 minutes.”

Their presentation was very thin on details, and they were pummelled with very smart, and skeptical, questioning from Culver City residents and council-people -- about jurisdiction, liabilities, risks, ownership and accessibility.

One resident accused the company of being funded exclusively by the sale of Boring Company hats; but most critical was councilmember Meghan Sahli-Wells, a big bike advocate.

She said she was very concerned by “the whole public versus private” thing, adding, “from a technology standpoint, from all of the videos that you can see online, it looks super sexy, super easy, but it's half baked. It’s half baked from a public perspective.”

She argued that private initiatives like Musk’s underground transit system encroach on public space and public access. She said, “L.A. County is leading the biggest infrastructure revolution in the entire country. We've decided to tax ourselves in order to pay for a system that serves us all. And to me this looks like competition for something that we know actually works.”

Unfortunately though, today’s numbers suggest the traditional mass transit system is not working -- and increasingly transit solutions are going to result from private-public partnerships.

Despite reservations, several Culver City councilmembers were supportive of moving ahead with discussions with the Boring Company.

Meanwhile, Metro is actively seeking collaborations with the private sector through what is called its Office of Extraordinary Innovation.

Metro’s Chief Innovation Officer Joshua Schank recently told DnA about their “three-pronged program” for private-public partnerships, which seeks outside ideas for: faster, cheaper delivery of major transportation projects; strategic planning of the network; and improvements through technology of transportation in Los Angeles.

He says typically companies come in with sufficient capital to put some “skin in the game” and test a concept. If Metro likes the project a deal is worked out.

His department has received around 90 unsolicited proposals so far, many of them tech-related, including drones that would inspect facilities and track; also, better provision of parking for bikes at stations and an Uber-style partnership for taking people to and from stations.

Several cities, including LA and Culver City, are also looking at micro-bus shuttles that would deliver people from home to a bus or train stop or business.

Schank made clear that while one hears a lot about Elon Musk, they welcome ideas from all individuals and companies.

He said, “I know it sounds like something out of Harry Potter but what it really is is an opportunity for us to bring best practices in transportation from around the world to Los Angeles. Obviously the transportation problem here is quite extreme. So we need some extraordinary solutions to tackle them.” 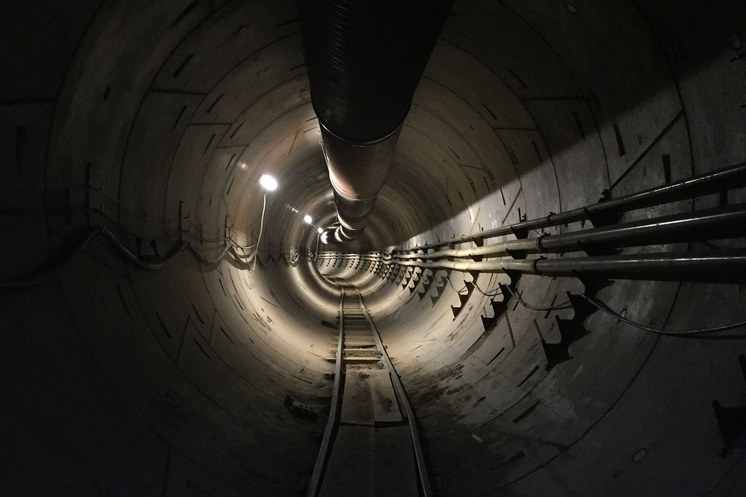 Elon Musk shared this photo on Twitter on Oct. 28, 2017 of the Boring Company's initial progress: a 500-ft long tunnel beneath the SpaceX headquarters in Hawthorne. Photo credit: Elon Musk.