At the LA Auto Show, the future of cars is “not a car” At the Automobility LA press and trade show that precedes the LA Auto Show, Volvo chose to not show any cars, instead highlighting their technology. Photo by Frances Anderton/KCRW

At the press preview for the LA Auto Show Wednesday, two displays got a lot of buzz. One was for the new Jeep Gladiator, which actually drove up stairs in front of an excited crowd.

The other showed no cars at all. Volvo, the Swedish car company, revealed simply a blonde-wood kinetic sculpture bearing the words “This is Not a Car,” some colorful cushioned seats, large signs touting connectivity and Amazon delivery, and the shell of a car in which you could put on a VR headset and get a taste of the lifestyle that is around the corner in an autonomous vehicle future, where you glide through a clean Scandinavian countryside inside a car that’s now living room, office, VIP lounge, or sleeper car. 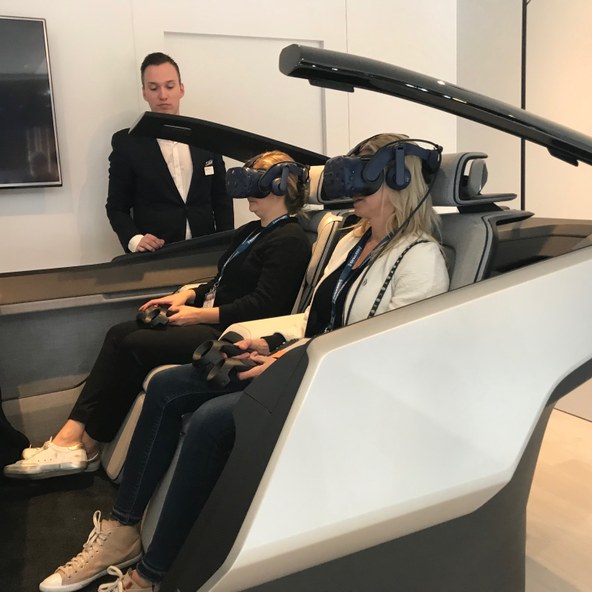 Robin Page, Senior Vice President of Design at Volvo Cars, told DnA they’ve gotten a big response to not putting a car on the show floor.

“I think people are like, okay, this is challenging to the industry. I mean if you look around we've been presenting cars in this way for many, many years now. And the industry is changing and the millennial generation is really influencing how we communicate and what the focus is,” Page said.

Bryan Grant, producer with the YouTube channel New Car Spin, said he loved “the irony of their display” because Volvo is essentially calling out the industry. He pointed out that a lot of manufacturers tout vehicles that are autonomous or all-electric and yet they are not yet in production, while Volvo chose to avoid “cheap talk.”

What are the other cars people were buzzing about?

The Porsche 911 is the eighth iteration since the first prototype of the car was shown at the Frankfurt Auto Show in 1963. Those tweaks included one that seemed somewhat banale: a cup holder.

Not that it did not have a cup holder before, but it was less easy to access. Now, said Porsche spokesman Frank Weissman, it’s been “relocated to the center console from its former position above the glove compartment that you had to open.”

Weissman told DnA the emphasis is not just on performance but also convenience for the daily Porsche driver. He added that Porsche sells a third of its cars to the American market, and American drivers demand cup holders. 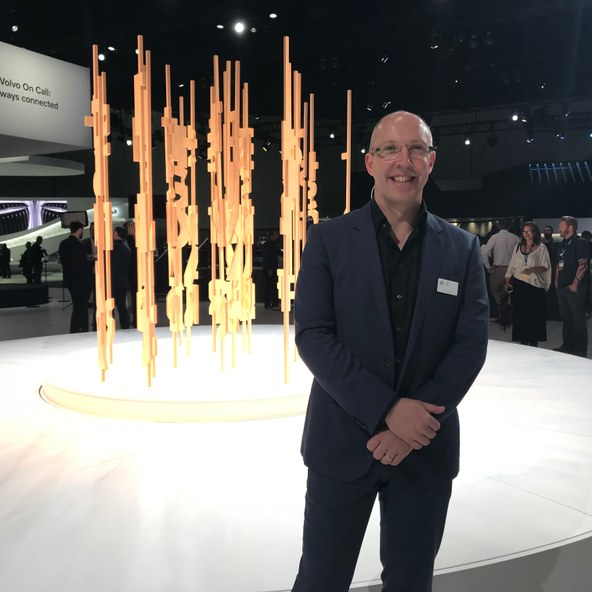 Robin Page, Senior Vice President of Design at Volvo Cars, says they’ve gotten a big response to not putting a car on the show floor. Photo by Frances Anderton

Another tweak was a wet detection system to make the car more suited to driving on a wet road. But don’t drivers see if the road is wet? “We want to make them more aware of it,” said Weissman, “and it preconditions all the electronic stability control systems, ABS brakes, and so forth for the wet road.”

Another car that’s been getting buzz is the Genesis G70, a sports sedan from Hyundai's luxury division that's comparable to the BMW 3. It won best car from Motor Trend and was in the top 10 of Car and Driver’s top new cars.

And then Jeep unveiled the all-new Gladiator, a pickup version of the very popular Wrangler SUV.

Did GM’s announcement of factory closures cast a pall over the conference?

Very much so. Dave Vanderwerp, deputy online editor at Car and Driver, told DnA that the news “coming out of the holiday weekend seemed to hit especially hard.” He added, “we're located in Ann Arbor and a number of the slated plant closings are in and around -- a couple in Michigan and one in Ohio -- all in our area. So it definitely hits home.”

While the job losses are disastrous, there is a logic to the company’s decision, Sharon Carty of Automotive News told DnA.

“In the past the automakers tended to react to the bad economy. But right now the economy is still great. Car sales are still really good. But GM is signaling to the industry and to the world that there are headwinds coming and that they need to react,” she said.

Carty explained the cuts are being made to the car manufacturing plants because American car companies have “moved to crossovers and SUVs. Ford has also decided to get out of cars. They are in a couple of years only going to be producing the Mustang and the Ford Focus.” However, she added, Asian and German automakers are “still really strong in cars.”

What about all-electric cars? Is that still big news?

Yes, there were many examples but there’s still questions hanging over them.

Car and Driver announced their ten top cars today. Only one was an EV, or electric vehicle -- the e-Golf -- and they did not include the Tesla 3 in their list (back seats too small, among other shortcomings.)

“The future will be highly electrified,” he predicted, “but how exactly we get there and at what point does a sizable part of the market buy EVs is the big question.”

He said that range continues to be a problem. Only Tesla, he said, “has proven that they have made long-range EVs that can sell in fairly high volume, which is a great first step. But they still haven't shown they can do that profitably.”

“And so that's why a lot of the automakers’ efforts are a bit tentative,” concluded Vanderwerp, “because they're all losing money as they invest and they want to be ready to go when the market's there. It's a bit of a chicken and egg problem.”