The Tehachapi Mountains are “effectively a wall that divides the state and has divided the state throughout its whole history,” says Joe Matthews, Connecting California columnist. Mathews joined DnA on a trip to the Central Valley to catch up on progress of a project that promises to connect San Francisco, the Central Valley and LA, bridging communities cut off by California’s difficult geography.

Yet many in the agricultural industry are opposed to the train because it will effectively create a wall on their land, making it difficult to farm. Acquisition of land for the 119-mile stretch of track between Merced and north of Bakersfield is proving such an obstacle to progress that costs are skyrocketing and voters are falling out of love with the project, to the point that the next governor might pull his support.

But while the fights continue, building is moving ahead and a surprising amount of the route in the Central Valley is already underway. There are 17 construction sites, says Diana Gomez, Central Valley Regional Director for the California High-Speed Rail Authority, including overpasses, underpasses, a trench, bridges and viaducts.

Gomez is an electrical engineer who grew up in the Central Valley, oversaw Carmageddon while working for Caltrans and now oversees the Central Valley portion of the rail. One of her tasks is to negotiate the acquisition of land, property by property.

She tells DnA: “We have made a very big effort to sit and talk to every single farmer, figure out how they operate... and mitigate whatever concerns they have, whether it's irrigation, how they move around their farm, their operations, their wells, their crops.” Gomez shows DnA a viaduct at the south end of Fresno, which involves constructing a huge steel and concrete “pergola” to carry the high speed rail over the slower Amtrak line, and a bridge over the San Joaquin River at the north end.

Bob Brazil, a Hanford farmer says he resents the advent of rail because it is chopping up his farmland “like a pizza.” Meanwhile, economic development leaders and tech entrepreneurs believe it could help change the fortunes of Fresno County, home to “virtually every economic and social ill” and some of “the most forgotten humans in our country,” according to Bitwise co-founder Jake Soberal.

Even if high speed rail tickets might be big ticket items for some of the people Bitwise hopes to reach, Soberal sees the train as a connector that could help stimulate Fresno’s economy.

High speed rail lurches ahead at the same time as President Trump has been touting an infrastructure plan for the U.S.

But his plan calls on the states and the private sector to pick up the tab, further threatening California’s high speed rail, already seen as a boondoggle by politicians on both sides of the aisle.

And yet people seem to want a way to bridge large stretches of land very fast. After all, there is a lot of excitement around another super-high speed transit project: Hyperloop. DnA talks with a transportation expert about why Hyperloop gets people excited and high speed rail doesn't.

And we’ll ask if simply putting shovels in the ground is a vote of confidence that might compel voters and elected officials to keep moving forward on the construction of this bridge on wheels.

“With every bit they build it's going to make it harder to remove,” Joe Mathews says. 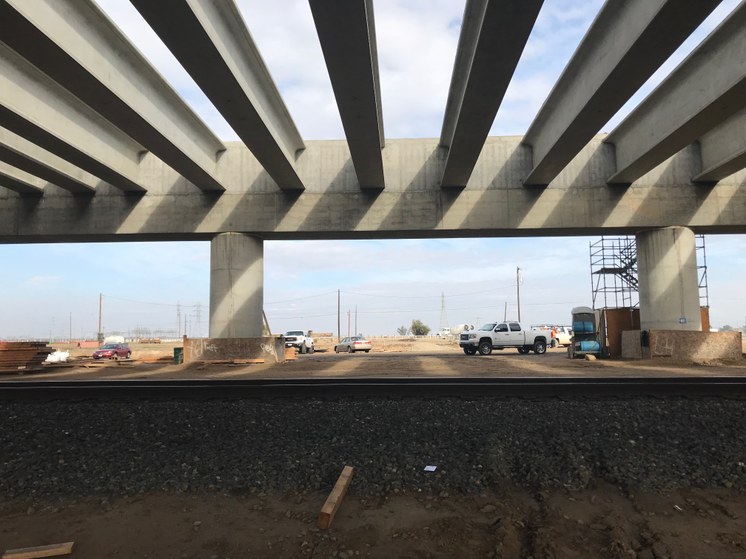 The pergola in the San Joaquin River Viaduct will allow California’s high-speed rail to cross over the Union Pacific tracks at the south end of Fresno. Photo credit: Avishay Artsy.