The Futurama exhibition at the 1939 New York World’s Fair “opened people's eyes in an unprecedented way to the possibilities of what was believed to be the future at the time,” said Alexandra Szerlip, author of a biography of Futurama’s designer, Norman Bel Geddes.

“Traffic was a huge problem,” Szerlip said. “I think more people died on the roads in America from vehicular accidents than had than American soldiers had died during World War One.”

Los Angeles went crazy for freeways. They enabled people to drive until they reached land where they could buy an affordable house and a large yard and they were embraced for several decades.

Some people even found them beautiful, like the British architecture critic Reyner Banham, who wrote about the “autopia” of Los Angeles.

Banham’s book “Los Angeles: The Architecture of Four Ecologies” came out in 1971. A decade later a young man named David Brodsly published a book called “LA Freeway: An Appreciative Essay.” He wrote that the "L.A. freeway is the cathedral of its time and place" and driving along it offers an almost spiritual experience.

But by the time “LA Freeway” was published in 1981, many Angelenos were losing patience with the system.

Pollution and congestion were rising and in 1985 construction began on the region’s first subway.

“And for me it's literally an iconic landscape, as much as Egypt is in relationship to the pyramids,” Opie said.

But other artists made work to register their protest.

UCLA urban historian Eric Avila teaches Chicana and Chicano studies and wrote the book “The Folklore of the Freeway.” He took us to Hollenbeck Park in Boyle Heights, which was divided by the 5 freeway. 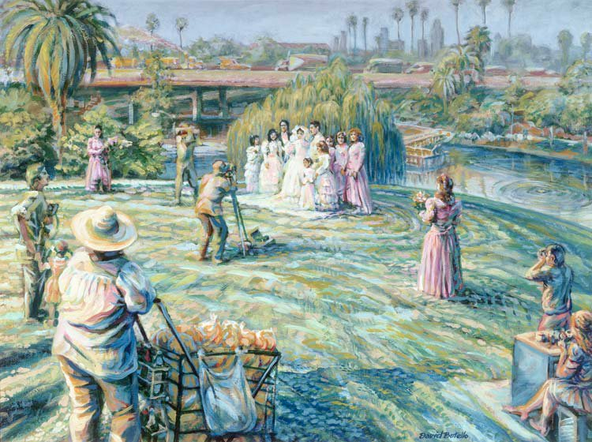 As early as 1957, residents of Boyle Heights spoke out against the construction of the freeways, which now cover 10 percent of the neighborhood.

“It was targeted for its racial and ethnic diversity. It was described by the federal government as hopelessly heterogeneous, and in this report by the Homeowners Loan Corporation, it said this would be an ideal location for a slum clearance project, and that slum clearance project was highway construction,” Avila said.

Eric Avila has spent many years studying how communities deprived of political and economic resources and opportunities turn to culture -- visual art, performance, music -- to express resistance. And he says that’s why freeways started cropping up in Chicano art.

“The inclusion of the freeway in Chicano art is a reflection of daily life. But it's also an effort to domesticate or to make oneself at home in this inhuman landscape, this toxic landscape of freeways, to imbue the freeways with color, the kind of color that that reflects traditional patterns of Mexican culture, which is a sharp contrast to the colorlessness of the concrete that the freeways are built of,” he said.