City of Santa Monica lets restaurants serve in parking lanes, taking on the primacy of the automobile The City of Santa Monica relies heavily on tourism, dining and retail. All these businesses crashed during the COVID-19 lockdown.

Restaurants owners on Main Street, between Pico Boulevard and Pier Avenue in the Ocean Park neighborhood, were desperate.

So the city jumped in and took action. They took out the parking lanes on both sides of Main Street and made them available to restaurants for socially distanced, outdoor dining. They put in heavy K-rail as a protective barrier from cars. Restaurants added decor and diners came streaming back.

“It had a transformative effect,” says Anuj Gupta, Deputy City Manager for the City of Santa Monica. “It lifted the morale of the community.”

Efforts to open up the streets for dining and other services are being encouraged in other commercial districts in Santa Monica. They are also being tested all over the Southland. For example, the Glendale Galleria shopping mall put tables and chairs inside a parking structure.

Not only have these interventions in the street boosted business at a very difficult time, but they have challenged the status quo in Los Angeles County.  Automobiles and their parking needs dominate urban planning in our region. Some 200 square miles of space in Greater LA is given over to parking, says mobility expert John Rossant.

One of the leaders of the Main Street Al Fresco dining program, Hunter Hall, had already tried to shake up the parking zone. He helped create three permanent parklets on Main Street. Parklets are public seating areas typically built into one or two parking spots. These parklets were being tried out by the city and analyzed in a UCLA study.

“But now that we have this program, we've kind of blown that out of the water,” Hall says, who runs the Main Street Business Improvement Association and worked closely with the Ocean Park Association, a residents group, on the makeover of Main Street. “We’ve leapfrogged steps two through eight, and we've demonstrated very rapidly that this is a very successful program, and hope to keep it permanently.”

Current Al Fresco revenue accounts for around 30%-40% of pre-covid revenue at most places, says Hall. Those with large enough outdoor space get a bump of closer to 60% or 70%.

Gupta says that they hope to maintain the al fresco dining into the future. He adds that the city itself has learned lessons from this experience. Faced with a crisis, staffers cranked the wheels of bureaucracy far faster than usual, bringing stakeholders together to create a plan in two weeks. They restriped the road and installed the K-rails in a matter of days and they committed to responding to permit applications within 48 hours. All this has been accomplished by a leaner city staff. The massive drop in sales tax revenue caused the layoff of a third of city staff.

“We absolutely intend to learn from this and even beyond the crisis keep using these new ways of doing business, new ways of identifying efficiencies and supporting our businesses more flexibly and more quickly,” Gupta says.

Meanwhile, it is up to restaurant owners to make their parking areas attractive, and that means figuring out how to conceal or enhance the K-rails, concrete barriers that weigh about 4000 pounds. 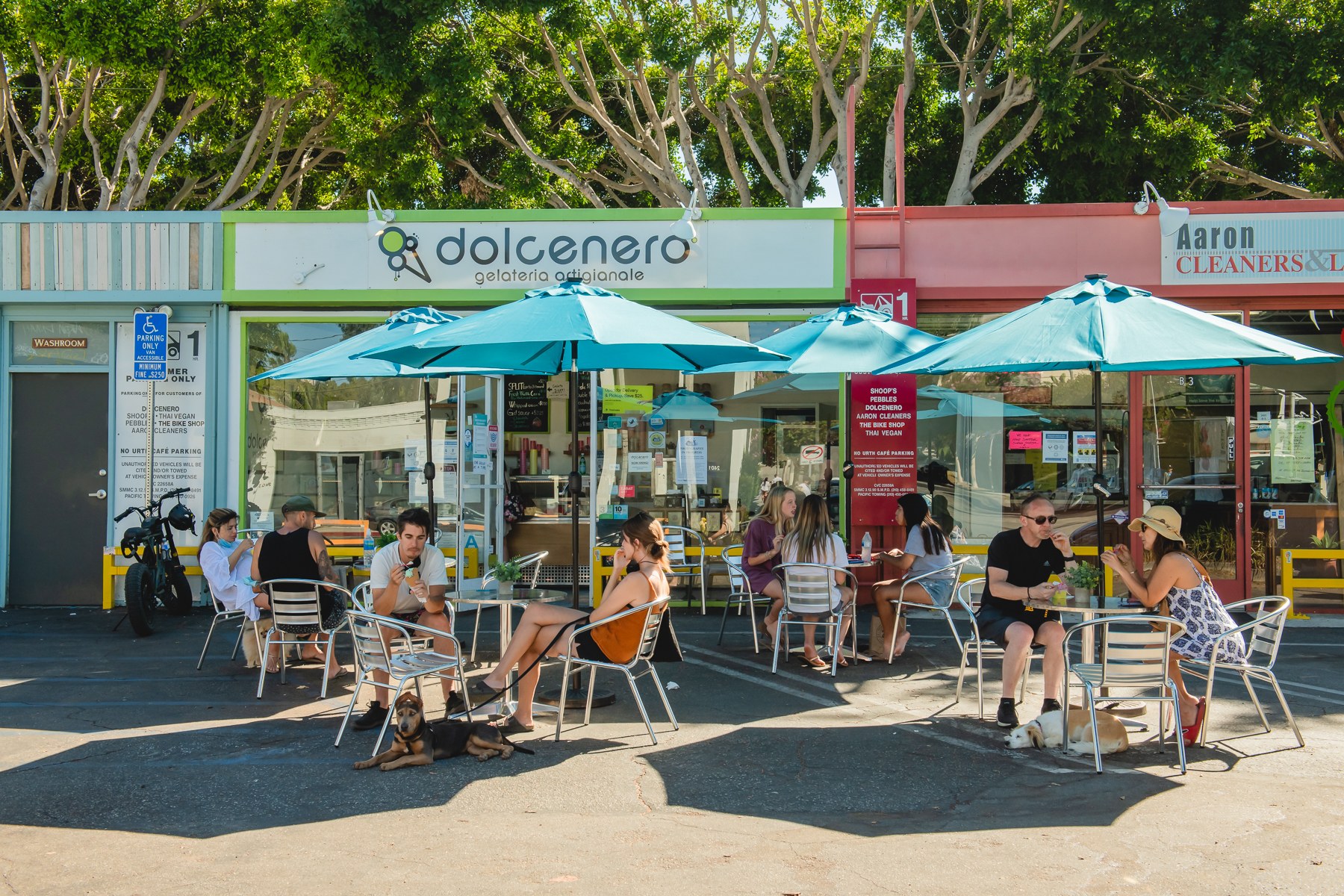 Walk up and down Main Street and you will see a variety of approaches: a faux hedge and potted plants at Chinois on Main, Astroturf climbing up the K-rails at Tsukiji Sushi Sen and, at high-end French restaurant Pasjoli, blue carpet on the ground and some chic, square umbrellas.

Ann Hsing, COO at Pasjoli, says “that was the intention: to provide these dramatic large umbrellas to hopefully catch your eye from the other side of the street and also to differentiate us.”

She points out there were some practical challenges to moving seating into the road.  The pavement slopes for drainage, so their solution was to arrange a row of tables on the flattest part of the street and another row of tables on the sidewalk. That has been just one of several sticky problems in a very unstable time for the restaurant industry.

But, she says: “In March the whole city was really empty, and it was almost depressing and eerie. So now we've got all these tables outside and it's bringing the community more together, at a social distance of course. In that respect, I think it's amazing.”