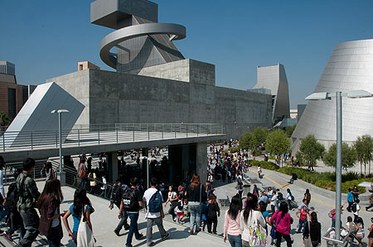 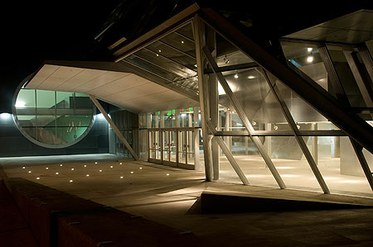 Instant Landmark
If you've driven anywhere near downtown Los Angeles, you've certainly spotted Central Los Angeles Area New High School #9, also known as the School of Visual and Performing Arts, reaching over the 101 freeway. Austrian architects at Coop Himmelblau designed the school, which opened to students this month. Frances speaks to Rex Patton, executive director of the school, as well as some students about some of its unique features. Two writers for the Los Angeles Times give background on the school's troubled path to completion. Mitchell Landsberg describes the exorbitant and controversial costs required to finish the building, which he contrasts to a new charter school in South L.A. renting space in a church, as he covered in a recent article. And architecture critic Christopher Hawthorne joins the conversation as well, after giving the school a "pass/fail" grade in a recent review. Architect Wolf Prix chimes in to explain the dramatic design and why it's important for the city. The school is located at 405 N. Grand near the Bunker Hill neighborhood and although it is not open to the public, the school plans to begin inviting small groups in for tours.

The Real (M)ad Men
Filmmaker Doug Pray is best known for turning his camera on subcultures like he did in Surfwise and Hype. But his new film, Art & Copy, focuses on a very mainstream world, the advertising industry. Legends of advertising like Dan Wieden, Hal Riney, George Lois, Mary Wells and local ad agency Chiat Day's Lee Clow are among the creatives profiled. Art & Copy is screening in several theaters in the Los Angeles area as well as in Orange County, check the site's screening calendar for more information.

A Citywide Survey
Ken Bernstein is the leader of architectural preservationist team sponsored by the Getty Foundation and the Office of Historic Resources at the Department of City Planning that hopes to record each of the 880,000 properties in the 466 square mile city of Los Angeles. He talks to Frances about exactly how they plan to do this, and how long he thinks it might take. A three-part film that launched the initiative recently won a local Emmy award (the first segment is above, the rest are viewable here). You can learn more about the process, and see the group's findings at Survey LA.