To be clear, there's no Santa Monica ferry service yet.

Santa Monica used to dock gambling ships back in the 1930s, and there is the remnant of a protective breakwater.

There was a ferry service that ran from Marina Del Rey harbor to Catalina Island, but no longer.

Some local cities like Long Beach have water taxis, but those are really meant for tourists or special events, not commuters.

But ferries could be handy in emergencies. When mudslides closed the 101 near Montecito, the ferry service to the Channel Islands was rerouted to get workers from Santa Barbara to Ventura. And given the rainy weather, it’s something worth thinking more about.

And then there was a wild idea to have people drive out into the ocean. Back in the '60s planners floated the idea of a Causeway - an extension of the freeway that would go out into the ocean from Santa Monica to Malibu - but that plan was sunk.

People in the water transport industry are now looking into possibilities for a ferry. DnA went on a boat trip with Dan Salas, owner of Harbor Breeze cruises, in San Pedro.

Back in 2014 he worked on a pilot water transportation project with Google. They wanted to move their employees from downtown San Francisco to Redwood City.

And right now he’s considering the possibility of providing a ferry service in the San Pedro harbor.

Meanwhile, SpaceX is looking to move its rocket-making operations to the south side of the main channel of the Port of Los Santos on Terminal Island.

The new facility on the former Southwest Marine Shipyard would be used “to design, develop, and manufacture prototypes and first-generation models of specialized commercial transportation vessels,” according to a project description.

There's very limited parking on the island, and on the San Pedro side of the harbor there's plenty of parking there to run a shuttle service right across the main channel.

So Dan Salas and his company are actually taking a good look at that to see if it's feasible to not just run a ferry but to actually operate electric boats with electric power. 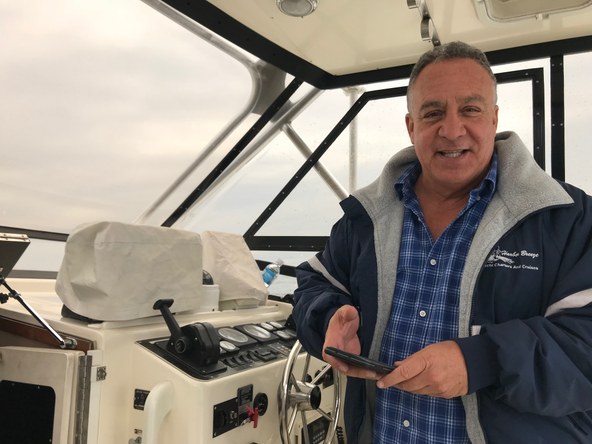 In principle this could be expanded to more of our coast, but Salas points out there are a bunch of logistical challenges, the main one being the difficulty of transporting people in open sea.

Most points where you get on and off boats are in open sea with the exception of Redondo Beach and Marina del Rey, but Redondo Beach is tucked away from major traffic arteries.

Santa Monica would be ideal if its old breakwater was rebuilt.

You also need a fast boat -- it has to outpace cars -- and this involves a lot of fuel and you have to cover a lot of the ocean.

Then you have to guarantee the passengers, there's the insurance, the cost of the vessel, maintenance, inspections, and the upkeep of cars.

But there are a lot of tech workers in some of these coastal communities, and Silicon Beach companies might be willing to subsidize a ferry service.