Trump International Hotel is a very impressive building, with a soaring atrium space that now functions as the lobby of the hotel. It's in a decorative Romanesque Revival style with round arches and gorgeous tile work and marble. Its architecture speaks of a time when the post office was the pride of the nation.

"It's a very grand expression of the power and I think the idealism of the idea of government providing that service. And now it's owned by somebody who whether or not he is or isn't in line with this, is certainly closely allied with political elements in the United States who are really kind of stripping away the services that government provides. And the post office, of course, itself has been under great pressure. So in a sense there's a sort of nostalgia that's built into this building," said Philip Kennicott, architecture critic at the Washington Post.

Trump has installed some huge blingy chandeliers and there's a fair amount of gold finishes (on the trusses, handrails and elevators and other metalwork) but generally it's not gaudy as one might expect. (The hotel's web site claims that you'll find: Luxury Reimagined. History Reawakened.)

Even skeptics were impressed at the renovation of the building, though are still critical about the gaudy design.

"You can see that with a little bit of scrubbing and a nice sort of architectural eraser, you could take that out and it could actually be quite a beautiful space again," Kennicott said.

But according to architecture critics and preservationists in DC, Trump was compelled to preserve much of the building in return for getting some great tax breaks.

People were nervous though because of when the 1929 Bonwit Teller building in New York was demolished to make way for Trump Tower in 1980. Back then Trump promised to preserve two irreplaceable Art Deco sculptures and give them to the Metropolitan Museum of Art. But then he had them smashed, claiming the cost of preserving the sculptures at $32,000 plus a 10-day construction delay was not worth the expense. 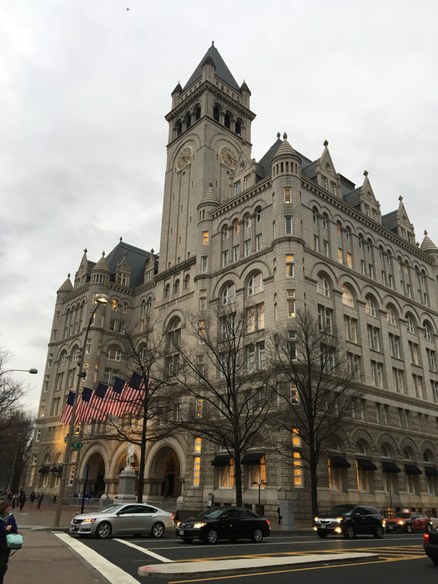 The Old Post Office was built from 1892 to 1899 to house the U . Post Office Department Headquarters and the city's post office. It was designed by Willoughby J. Edbrooke, and was the first steel-frame building constructed in Washington, DC. The building served as the US Post Office headquarters until 1934, and went on to house a variety of federal agencies.

Its past use is rife with ironies. During the 1960s, it was the headquarters for the wiretapping unit of the Federal Bureau of Investigation, an agency that President Donald Trump has accused of tapping his wires at the Trump Tower in New York. It also has been the headquarters of the National Endowment for the Arts and the National Endowment for the Humanities, two agencies that may be eliminated by the Trump administration.

The central clock tower has an observation deck where visitors can go up inside the 315-foot-high clock tower for sweeping views of the city. Tours are operated by the National Parks Service, and it offers the highest public vantage point in the nation's capital, with the Washington Monument closed for elevator repairs.

It had its grand opening as Trump International Hotel in September, 2016.

The hotel is now the recipient of a lawsuit by a nearby wine bar. The plaintiffs, Khalid Pitts and Diane Grossown, own the Cork Wine Bar in the Logan Circle neighborhood, about a mile and a half away from the hotel. They allege unfair competition under local law and have filed a lawsuit against Trump personally and the Trump Old Post Office LLC, which operates the Trump International Hotel. The suit claims that clients seeking to influence the U.S. government are more likely to do business at the Trump restaurant and hotel.

The plaintiffs also allege that Mr. Trump, his family and White House staffers have continued to promote the hotel. White House Press Secretary Sean Spicer spoke at a news conference praising the hotel, saying “It's a beautiful place. It's somewhere that he's very proud of… I encourage you to go there if you haven't been by.” The president has also spoken favorably about the hotel in his meetings with elected officials.

Kennicott told DnA this raises questions about the legitimacy of the contract with which he's operating the hotel. The Old Post Office is owned by the US government and it's leased by the General Services Administration.

"They had a rule that said that if whoever took that lease could not be a political office holder," Kennicott said. "So it raises fundamental questions that are being raised in other areas of American political life about the conflicts of interest and even the legitimacy of the Donald Trump presidency."