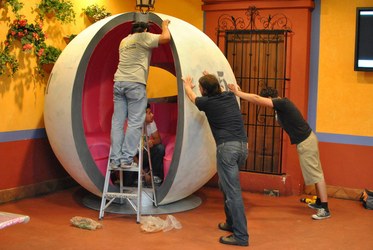 Three months ago, we launched a competition for a sound booth for Sonic Trace, a show of stories from immigrants from Mexico and Central America produced by Anayansi Diaz-Cortes and Eric Pearse-Chavez. A month later we announced the winner, Hugo Martinez, who, together with his partner Christin To, had designed La Burbuja or Bubble -- a silvery globe with a womb-like interior with comfy cerise seating. We asked them to build it for $5000 and have it ready by the end of August. And we knew that the very features that made their scheme so alluring –– the curves, the upholstery, the smooth silver surface -- would be very challenging to build. We even wondered if they’d be able to pull if off. One week ago, Sonic Trace and KCRW hosted a party at Guelaguetza, the famous Oaxacan-style Mexican restaurant. And there in the corner of the room was the La Burbuja. And it was a very cool silvery pod, with a very hot pink interior –- far pinker than we had anticipated. Along the way, Hugo’s brother-in-law, Evaristo Cardenas had suggested they make it rosa Mexicano -- Mexican pink. And people at the party, KCRW listeners, including immigrants who had come to share their stories with Sonic Trace  were being drawn to the orb, climbing inside and relaxing into its soft seating. Frances speaks to Wendy Carrillo about her experiences inside the bubble, and architectural assistants Megan Pryor and Carlos Moreno about building it.

If you'd like to donate to La Burbuja, the Kickstarter fundraiser has already met its goal but will still be taking donations for a few more days. 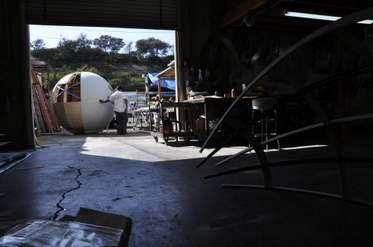 The bubble coming together at Mat-Ter's studio 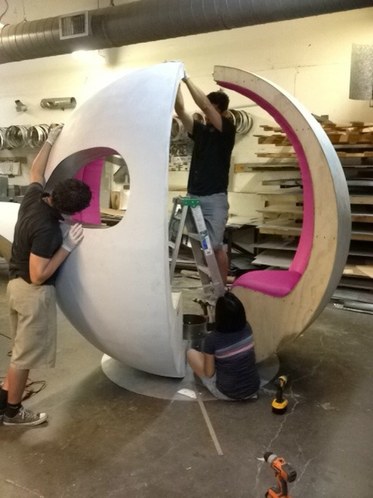 Forming the orb of the sound booth 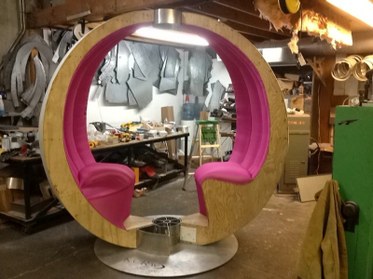 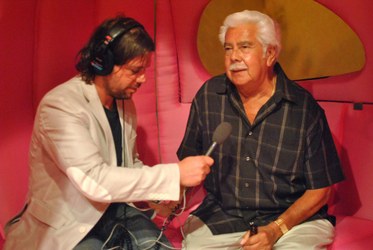 The bubble in action, photo by Javier Cabral

The team created a slideshow to show their process, which you can also view over at Flickr.

Three months ago, we launched a competition for a sound booth for Sonic Trace, a show of stories from immigrants from Mexico and Central America produced by Anayansi...

This summer there are two exhibits that single out the work of women designers: The Autry National Center in Griffith Park is showing California's Designing Women,...