A young woman has only her dog for company while living on the street. Image courtesy Pets of the Homeless

Why are supervisors telling landlords to let pets live in their homes?

Nearly 10 percent of homeless people have pets, according to one non-profit’s estimate, though it could be closer to 25 percent.

Supervisors Hilda Solis and Kathryn Barger co-authored a motion that got approved Tuesday to draft an ordinance requiring all county-funded housing to allow pets.

Solis cited studies showing that people with pets “experience fewer symptoms of depression and loneliness. For many, a pet may be their only sense of family.”

Solis said that “no one should have to sever a bond with a pet in order to find housing.''

But it’s not easy to be picky when you’re offered housing. The county has one of the nation’s largest homeless populations, but its ratio of shelter beds to homeless people is among the nation’s lowest.

A draft ordinance on the Supervisors’ motion is expected back in 90 days.

There’s also action in Sacramento to help get homeless people off the streets and keep their pets. State Sen. Robert Hertzberg has proposed a bill that would dedicate $5 million to shelters to provide food and basic care for animals belonging to residents. 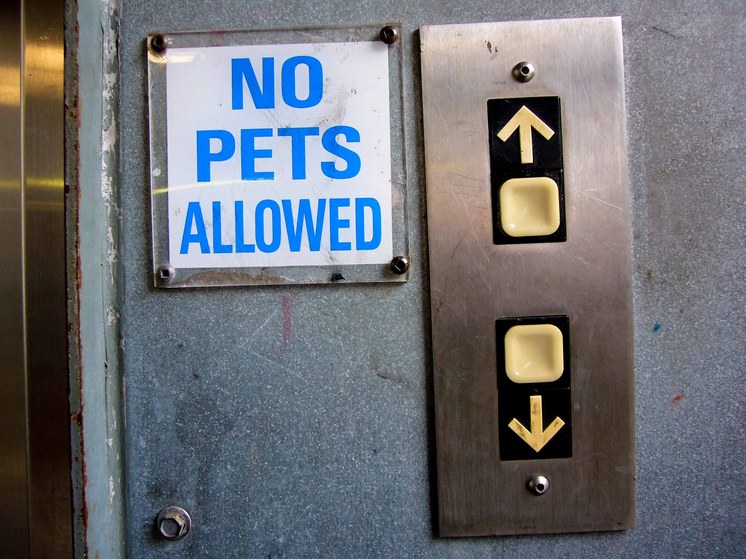 Are pets a concern only for homeless people?

Pets are part of many people’s lives and to be prohibited from having one is distressing whatever your income level.

This is a wrenching choice for many Angelenos because so many people in the Southland rent.

The last census found that around 53 percent of LA County's population was living in a "renter-occupied unit" (compared to about 45 percent for the state of California or about 46 percent for New York City).

That’s more than half the population whose landlords have the right to determine if they can have a dog or cat.

You could see this as another form of class division between those who rent and those who own.

Add to that the fact that we are increasingly living alone.

The last U.S. census found that just over 110 million unmarried people over the age of 18 — about 45 percent of American adults — were single.

So why is this a design issue?

Often DnA focuses on design and architecture in terms of buildings.

But the built environment also encompasses the lived, social experience, and that is especially true of housing -- which is ideally where you find love and comfort as well as shelter, making a house into a home.

And pets are so often part of that domestic comfort.

70% of apartment renters reported owning pets, with cats and dogs as the most popular types, according to a survey by Apartments.com taken five years ago. But, the LA Times found that despite the high pet ownership numbers, it was still challenging to find a pet-friendly apartment.

Nearly two-thirds of pet-owners in 2014 reported having difficulty in finding an apartment that allows pets, even though a building’s “pet policies played a major role in the decision about where to rent for nearly nine out of 10 pet owners.”

While pets are prohibited by many building owners, in some parts of LA developers, designers and landlords are recognizing the value of pets, literally.

That’s especially true of downtown, home to many singles with dogs.

Metropolis, the luxury residential tower by the freeway, for example, incorporated a dog park on its upper terrace.

It is one of several downtown apartment and condo buildings that is offering doggie attractions including spas and concierge services.

So, renting can be a dog’s life.