The Department of Public Works voted this morning to remove 18 Indian Laurel Fig - a variety of Ficus trees - and the canopy they provide on Hollywood's North Cherokee Avenue.

Those particular trees have outgrown that area and they're creating an unsafe situation and condition for people, pedestrians, wheelchair users, along that corridor. And so the board today made the decision to remove those trees and replace them with others that would provide a safer passageway,” said Elena Stern, spokesperson for the Department of Public Works.

Urban forestry advocates say there are other ways to make streets safer without ripping out old trees. The city says it's impossible, because of the way the roots of the ficus trees have spread too far and torn up sidewalk.

Old trees provide great beauty to LA’s streets. But there are also environmental reasons for creating and preserving tree canopy -- they provide shade and help keep cities cooler and reduce the heat island effect. They can then keep people’s air conditioning bills down.

Stern says the city will add two new trees for every removed one. The new trees will have different root structures.

Defenders of those trees will say that it's going to take years for the new trees to grow in, and in the meantime we lose the shade.

Travis Longcore, a spatial scientist at USC, says the city lacks a comprehensive approach to preserving its tree canopy and that it is too easy for developers to have trees removed and not replaced.

He says many neighborhoods in the LA region have seen a tree canopy reduction of 14 to 55 percent, according to a study he co-authored in 2017.

And he says this is caused by the removal of both street trees and trees in backyards of single family homes when homeowners either mansionize or put in a backyard structure.

Elena Stern says the city is about to implement a comprehensive program of maintaining tree canopy.

She says they have a grant and are seeking a staff person who will oversee this.

This is not just an LA problem, it’s a regional problem.

South Pasadena has in place rules that protect trees on private property, Longcore says. In Santa Monica you will see many streets where ficuses have ripped up the sidewalk but the city has added soft surfaces around them to make them more maneuverable.

There’s also an Olympics angle to all this.

The vision for 2028 is based on getting people moving around on mass transit. But you have to get to the mass transit stops, and that route is very unpleasant and off putting if there is no shade. So trees need to be part of our transit planning too.

And, trees add loveliness. It’s worth remembering that one of the big tree planting efforts took place in 1931 when Los Angeles' forestry division planted more than 25,000 palm trees.

That was one year before the 1932 Olympics. And these trees played a part in beautifying the city. (The tree-planting effort was also part of a larger unemployment relief program).

If LA is to show itself off to its best effect in 2028, we’d better get busy planting trees. 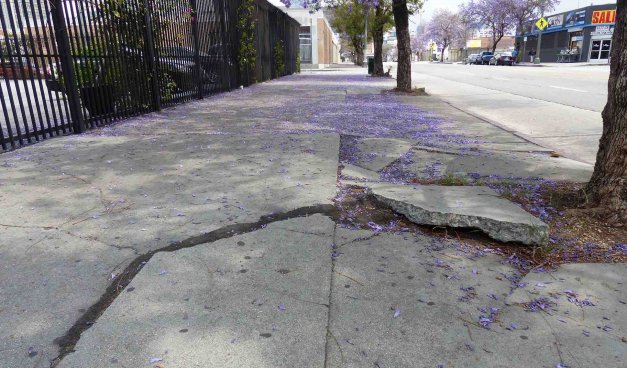