Slide show of all submissions for the Sonic Trace sound booth competition
Click to view FULL SCREEN, then SHOW INFO, this way you can view information about the submissions and the architects and designers!

Last month we launched a competition to find a design and designer for a sound booth for a new show of stories from Mexican and Central American immigrants being created by Anayansi Diaz-Cortes and Eric Pearse-Chavez. The conditions were tough: a tight budget, tight deadline and the designer had to build the project themselves. But still we got lots of interest and by the end of last week, many solid proposals. The jury of KCRW staffers included DJ Raul Campos and our engineer David Greene, who admits he had his eye on practicality. 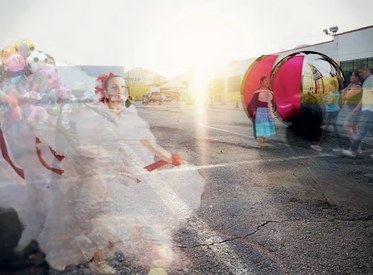 We found ourselves torn between equally delightful options but in the end we were drawn in fact to a “sphere of silence," a bubble, or, in Spanish, La Burbuja (shown above), a silvery orb that would open up in sections like a chocolate orange to reveal a womb-like recording space inside. The concept was for a “non-place”, in which the interviewee would be suspended in time and space, while passersby would see themselves reflected in a mirrored globe both dematerialized and opaque. Designer Hugo Martinez explains why he submitted his powerful design along with his strong personal reasons for taking on this project.

Martinez, who is also a contractor, will get to work building his Bubble. He’s convinced he can realize his silvery bubble on time and on budget; we’ll track the process and keep you posted. You can also see his design and all the others on display starting this Friday at Dwell on Design, the modern design show at the Los Angeles Convention Center.

Sonic Trace is being created in partnership with Localore, a national initiative from the Association of the Independent in Radio.

Networks, Connections and a Sound Booth for Sonic Trace

Knitting a 'Screenplay' for Dwell on Design

Journey to the Center of the Internet

Design and technology writer Andrew Blum was working away at his home in Brooklyn one day when his Internet connection was lost—something that happens to all of us more than...

Slide show of all submissions for the Sonic Trace sound booth competition Click to view FULL SCREEN, then SHOW INFO, this way you can view information about the submissions...