New homeless housing complex a sign of things to come 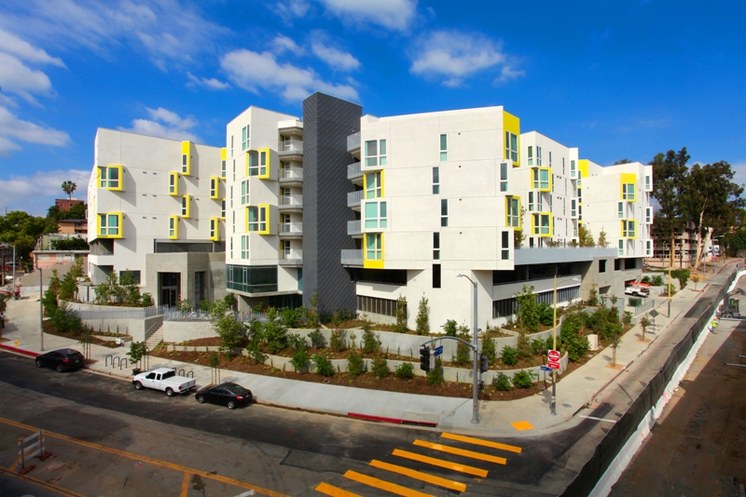 LINC Housing, the nonprofit affordable housing developer, is behind the project. It has 125 units for households that have experienced homelessness, low-income families and seniors. And it's a mix of one-, two- and three-bedroom units.

These units are in high demand. Nearly 1,900 households submitted applications for the initial lottery for the 60 affordable homes for families and seniors earning up to 60 percent of area median income.

Another 63 of the apartments are for formerly homeless households referred by the Los Angeles County Department of Health Services, who will also receive on-site wraparound supportive services.

One of the biggest challenges this project faced was the topography of the site. It’s on a hill with a 40 foot elevation difference from top to bottom. It took ages to get a developer interested and when LINC stepped forward, they had to remove 40 vertical feet of soil from the hillside -- “literally moving mountains,” said the chief operating officer of LINC Housing, Suny Lay Chang.

In addition, the 1.19-acre site was covered with rundown structures, broken down cars, trash and overgrowth.

It took City Councilman Mitch O’Farrell’s office cutting red tape to move the project along. It took two years from the start of construction to grand opening, which is remarkably fast for this kind of project.

The project’s construction is a basic concrete, stick and stucco structure. But it’s really quite attractive. It has stepped up terraces, and then rather than one monolithic box it consists of two multi-story buildings around internal courtyards. It has an interesting facade with windows twisted out at the corners, giving dimension to the building, with dashes of bright yellow.

The architect is Mark Lahmon, of his own firm Lahmon Architects. He’s been involved with affordable housing for over 15 years, and so he knows how to add architectural interest that doesn’t drive up the cost.

The folks living there have lots of amenities: laundry facilities, a community garden, computer labs, a commercial-grade kitchen, a crafts room, fitness center, a bike storage room and playground.

“Design is always important to us. We love the way this building looks. We want it to be something that people are proud of living in and that people are proud of having in their community, and also so that the people who live here, it brings them joy. It helps them heal. It's a place where they'd be proud to call it home,” said LINC’s Suny Lay Chang.

Total cost for the project was $57 million. The money came from multiple sources -- between 8 and 12 depending on how you count it -- and that includes city, county, state and federal funds, as well as conventional bank loans and some foundation money

This was greenlit well before LA County voters passed Proposition HHH, but it’s likely we’ll be seeing many more such projects that will be paid for with those new public dollars

This building was entitled for market rate housing many years ago. Many for-profit developers considered it and passed on it because of the complexities and cost of the hillside site.

The architect responsible for the original design said it took a nonprofit like LINC to be able to source the funds to build it. Because the project was already entitled for multifamily housing the process could move much faster.

All this matters because one of the issues that’s been raised recently is the cost of building permanent support housing. Prop HHH initially promised 10,000 units of housing. That estimate has dropped to 6,000. And there are several contributing factors: cost of land, price of construction materials, compliance with environmental standards and rules requiring union labor.

KCRW’s Saul Gonzalez’s reported this week that for the first supportive housing project funded by Prop HHH, the individual unit cost was over $400,000. Mosaic was less than that, around $300,000 per unit, but still that’s a lot of money.