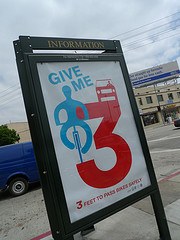 Ciclovias, or days where streets are closed to cars, began as popular events in Bogota, Colombia and have spread to European and American cities, like New York's Summer Streets. Now LA is enjoying its first ciclovia, aptly-named CicLAvia, on 10/10/10. CicLAvia board member Amanda Bromberg says the event is an important one for the city.

Piano's Resnick at LACMA; CicLAvia and Biking in LA

Ciclovias , or days where streets are closed to cars, began as popular events in Bogota, Colombia and have spread to European and American cities, like New York's Summer...

On October 2, the Los Angeles County Museum of Art's Resnick Pavilion opens to the public. The 45,000 square foot gallery is the newest art space at LACMA and the latest...

END_OF_DOCUMENT_TOKEN_TO_BE_REPLACED
KCRW's Drive to the Future: TODAY, you could win an Apple iPhone 12! Your donation to KCRW will also support Kedren Health, a community health center serving South LA, providing COVID vaccines, primary care, and mental health services equitably, regardless of one’s ability to pay.
Give Now
Give Now