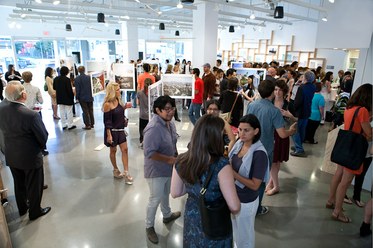 A new show, Rethink LA: Perspectives on a Future City is a beautifully designed exhibition that's currently up at the A+D Museum. Co-curator Jonathan Louie explains that the starting point for the show is the notion that LA goes through 50-year epochs, starting 100 years ago with the growth of the region via Pacific Electric Railway, and then transforming again with the Federal Highway Act of 1956. Rethink LA tapped 18 architects and designers to create collages of the Los Angeles 50 years in the future, starting with present-day photographs of notable areas of the city. Last Thursday night, the exhibition hoped to envision LA's post-automobile future by hosting the Moving Beyond Cars party, which challenged all attendees to arrive via bike, transit or walking, and to document their journeys. Frances chatted with attendees Jonathan Cowan, Bianca Siegal, Adam Coulson and Kat Fowler about their non-car experiences. Rethink LA: Perspectives on a Future City is up through September 4.

A photo in the exhibition by Noah Webb shows the Hyperion Treatment Plant,
which has been treating wastewater for over a century. 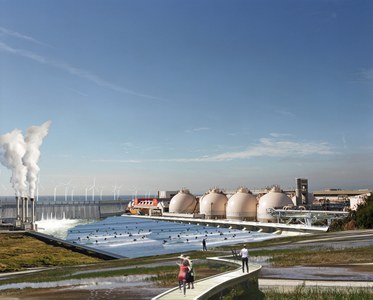 Taalman Koch re-envisioned the center as a desalination plant
and a recreation center, including a surf reservoir. 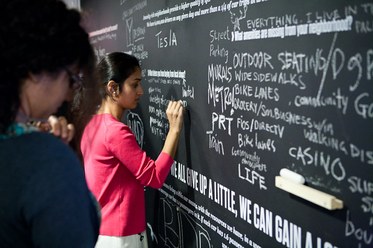 A giant chalkboard in the exhibition serves as a place
for citizens to record their ideas for a better city.

Five narrators (including Frances herself) provided context to the exhibition through a series of films. Here, Architect's Newspaper editor Sam Lubell examines the architecture and urban design of Inland Empire city Ontario.

Preserving the Past without Losing the Future

Is Preservation Going Too Far?

Earlier this year, the new owners of the Kronish House , a 1955 Modernist home in Beverly Hills designed by legendary Austrian architect Richard Neutra, showed signs that...

A new show, Rethink LA: Perspectives on a Future City  is a beautifully designed exhibition that's currently up at the A+D Museum .