Rebuilding infrastructure and the border wall In his State of the Union last night, President Trump made a big deal about how drugs, gangs and immigrants threaten American safety, and he called for "fully" securing the border and "that means building a wall on the Southern border."

But he didn’t say much more than that. He didn’t mention the eight prototypes, each 30 feet tall, that are currently sitting east of San Ysidro on the border of Mexico.

These structures have undergone strength tests. Apparently they’ve withstood cutting torches, jackhammers and concrete saws. And they’ve proven almost impossible to climb, and one test-climber got stuck at the top and had to be retrieved with a cherry picker!

So in that sense they work. But unclimbable walls doesn’t mean people won’t try and get across the border. People now risk their lives to cross in hazardous desert areas.

DnA is working on a show about the border and spoke with a writer named Francisco Cantú about a book that comes out next week called “The Line Becomes a River: Dispatches from the Border.”

He spent three years working as a Border Patrol agent, witnessing the deadly trips made by people desperate to cross the border. He writes about how one of the unintended consequences of a border crackdown is that, quote, “the alien becomes a commodity,” and smuggling becomes more profitable to traffickers.

The physical and emotional implications of the border are the subject of the first episode of DnA's new series "Bridges and Walls."

The series looks at examples of California infrastructure, both physical and metaphorical, and stories of connection and disconnection in our state.

The premise is that while we’ve heard a lot of divisive talk about the U.S.-Mexico border, for many in California the goal right now is linkage -- whether it’s reconnecting Angelenos to the LA River, connecting the Central Valley to the rest of the state via high speed rail, connecting LA to Hong Kong via a massive broadband cable or dreaming up zany new modes of transportation like the Hyperloop or an underground tunnel network under LA.

As we look at the construction of connection, we're seeing a lot of pushback against some of these projects.

One of the paradoxes of infrastructure is that it can divide even as it connects -- for example, the freeway system that broke up communities or the high speed rail that will gobble up and split up farmland in the Central Valley.

California has big infrastructure challenges. Governor Jerry Brown is being criticized for failing to deliver two major projects: high speed rail, and the Delta tunnels project, for a $16 billion project to carry Northern California water southward. It’s been pared down from two tunnels to one, with the second tunnel postponed indefinitely.

But amidst the negative talk about high-speed rail, the City of Fresno is being transformed by it, through construction jobs and the anticipated changes to the economy and wellbeing of the Central Valley.

And within walls there are doors that function as bridges, such as the Door of Hope in the border wall that allowed families to reunite twice a year, for three minutes each.

We are also looking at other, perhaps more offbeat, infrastructure proposals, like the Liberty Canyon wildlife crossing planned for Agoura Hills in the Santa Monica Mountains. That will enable mountain lions to breed as nature intended before they were divided by the 101, and we learn about how P22, the lion trapped in Griffith Park, has become a poster boy for this project.

To the extent there’s a through line, it’s that California was a state of visionary builders in the middle years of the 20th century -- it built huge networks like the freeway system or the channelizing of the LA River.

But these were sole purpose structures that also divided up habitat and territory and what’s happening now among designers and planners is an effort to soften edges, breach walls and form greater connectivity. That’s part of the reason why the border wall feels so jarring to many people. 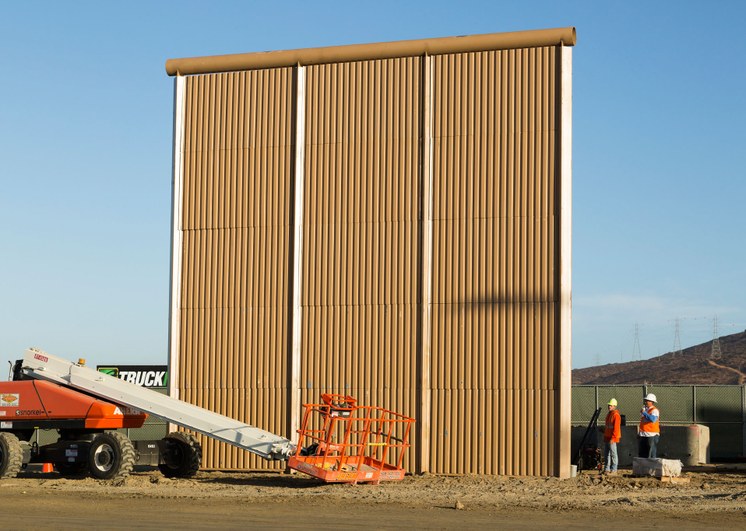 One of the border wall prototypes near the Otay Mesa Port of Entry. Photo by Mani Albrecht.