Yesterday Elon Musk’s company SpaceX launched its new Falcon Heavy from Cape Canaveral, the most powerful rocket on Earth. It contained a red Tesla roadster for added fun and bravado.

The dramatic take-off sent MSNBC’s Brian Williams into paroxysms of excitement. In his show 11th Hour he exclaimed, “Elon Musk showed the world how it’s done,” and then he went into a diatribe about America’s failed transit infrastructure.

“Think about the gulf between Elon Musk and all that he can imagine and build and the parts of our lives that don’t have an Elon Musk to care for them,” he said, noting that “high speed trains around the world are over twice as fast as ours.”

And that’s when they move.

Right now California is in a struggle to keep even the construction of its high speed rail project on track.

And yet people are optimistic about the project in the Central Valley.

High speed rail is the signature legacy project of Governor Jerry Brown. A train that can go at speeds of around 200 miles per hour is intended to connect San Francisco, the Central Valley and LA.

The latest report of bad news was on the “linear ghetto” that’s been created by vacant lots lining the intended route.

According to the LA Times, The California High-Speed Rail Authority now owns more than 1,200 parcels stretching from Madera to south of Wasco.

It’s created a 119-mile corridor, 100 feet or more wide, through the Central Valley and because of the protracted litigation over many properties, we’ve wound up with abandoned buildings and vacant lots that have become a magnet for thieves and squatters.

That’s just one of the problems that adds to the financial quagmire.

The authority and its consultants seem to have vastly underestimated the difficulties of buying land, obtaining environmental approvals, and navigating through complex litigation.

And yet construction moves forward apace.

DnA went to Fresno in early January -- as part of our series Bridges and Walls -- and found a completely different energy surrounding high speed rail.

In LA, people either think it’s not even started construction or that it’s a big boondoggle.

But Diana Gomez, the new Central Valley Regional Director for the High Speed Rail Authority expressed excitement about the project.

Thousands of people are at work on construction jobs. And there’s a lot of excitement in the business and burgeoning tech community at what the train might mean for Fresno in the future.

She says the “connectivity [between the Bay Area and the Southland] is going to change everything for us.” By us, she means the new kinds of businesses that are setting up shop in Fresno, like tech start-ups. The idea is that the Central Valley, being a much more affordable area to live, will become a new tech hub.

But the Central Valley is the heart of agriculture, and certainly many farmers are anxious and unhappy about high speed rail. And it’s the negotiating of buyouts and handling litigation with each one of them that’s caused this protracted and ever more costly process.

Gomez was brought on board in large part to handle communications with Central Valley folks. She’s a local and she is seen as more conciliatory than some of the prior Rail Authority people who’ve been criticized for arrogance and not heeding the needs of folks impacted by the rail.

So it's a tricky time for the project. Every negative story begets more negative stories and certainly the candidates for governor, especially Gavin Newsom, are not nearly as openly committed to the project as Jerry Brown.

In fact we learned from a reporter that there is a Plan B for the route being built in the Central Valley to become simply an improved and dedicated stretch of line for 114 miles for Amtrak -- to get Amtrak off the freight rail line and speed the Amtrak service.

That is seen as a last resort. To Amtrak riders that might sound better than nothing, but it falls far short of a bullet train. 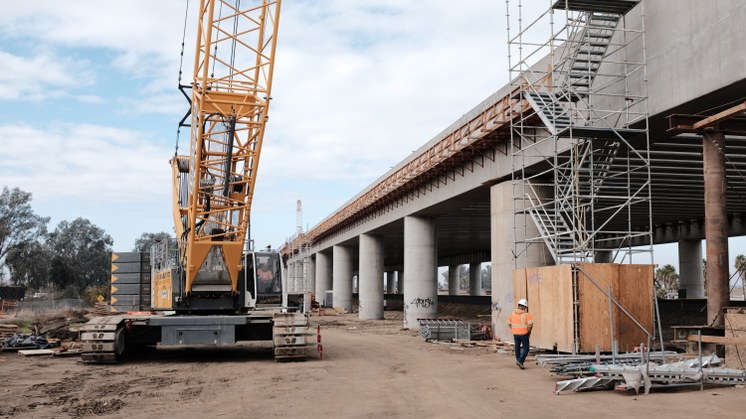 A section of the high speed rail track under construction in Fresno. Photo by Avishay Artsy.