The challenge of building new housing in density-resistant Los Angeles We all know LA has a massive housing problem. Lots of people are trying to resolve the homeless crisis and the creation of more housing for lower and middle class residents.
There are a number of initiatives going on right now that attempt in different ways to address this in the Southland.
There are new rules being discussed for renting out your home on AirBnB in the city of LA. Another is an LA County effort to place homeless people in tiny houses in people’s backyards. And there are protests being staged in the city of LA around rent control.
On Tuesday, an LA City Council committee voted to limit how long AirBnB hosts can rent out their residences to 120 days unless you are a host in good standing in which case you can get an extension.
“While on one hand you have affordable housing concerns or available housing concerns, on the other hand we don’t want to put people out in the streets from the homes that they now own," said Rick Coca, the communication director for LA City Councilmember Jose Huizar.
Hosts in Los Angeles make the most money of hosts in any city in California. Los Angeles short-term rental hosts with the company rented to 1 million guests and made $262.6 million in 2016, an AirBnB report found.
Airbnb and its hosts say such rentals help them pay the mortgage and bring tourist spending into new neighborhoods across the city.
But housing advocates, neighborhood activists and the hotel industry argue that temporary rentals have forced renters out of their homes to be replaced by higher-paying vacationers and that they disrupt neighborhoods.
It’s been reported that of the 23,000 units available for rent in Los Angeles on short-term rental platforms, as many as 10,000 are used primarily for short-term rentals; that’s according to a company that monitors short-term rental platforms.
Under the draft plan, a host could apply for an exception with the city to rent their places for the whole year.
Neighbors could also object, leading to potential legal fights.
The Planning and Land Use Management Committee started work on a draft ordinance to legalize and regulate short-term rentals almost three years ago.
Tuesday’s vote brings Los Angeles one step closer to putting some rules in place regarding short-term rentals, and it still needs the full City Council's approval.
LA can learn from Santa Monica, which has some of the toughest rules in the nation regarding short-term housing.
The Santa Monica City Council wanted to stop the rentals of entire units without a host present in the unit but still allow individuals to rent out a room or couch to a guest in their home, whether an apartment or house.
They have an enforcement program to identify rule breakers, and they issue fines to of up to $500 per day, and may resort to criminal prosecution if they do not cease operating.
Staffers check AirBnB rental lists for transgressors. However, they’ve found that people find ways around the rules -- the main one being that property owners don’t list their location as Santa Monica. Instead they’ll write things like Malibu-adjacent or Venice-adjacent. So down the line municipalities may have to demand AirBnB list zip codes.
Today it was reported that LA County is initiating a project to alleviate homelessness by paying homeowners to allow a homeless person or family to live in a small unit on the back of their property.
This is a small pilot project, created by the County and Mayor’s office, and supported by a Bloomberg Philanthropies Grant.
The LA County pilot program will lend homeowners $75,000 to build a backyard house or $50,000 for a bootleg renovation for up to six units.
Rents under the county's pilot program would be covered by low-income vouchers, with tenants contributing 30% of their incomes. The county is also sponsoring a design competition, streamlining permits and providing technical aid and financing options.
The loan principal will be reduced each year the unit is occupied by a formerly homeless person and forgiven after 10 years, at which point homeowners can do as they wish with the housing.
Meanwhile, more than 80 tenants launched a multi-building rent strike in Westlake over the weekend.
And there’s a big rally planned for Thursday in downtown LA about rent control.
There was a statewide bill to repeal the Costa-Hawkins Act (which makes it harder for cities to have rent control) but it was killed in a legislative committee January.
The struggle over AirBnB rentals, the effort to get homeowners to rent to homeless people, and the general effort to permit Accessory Dwelling Units (aka granny flats) all fits into a larger story of a huge lack of housing in the region -- for the homeless, for lower and middle income workers and even for higher income earners.
And this shortfall exists because of the ongoing, local opposition to denser development in the Southland.
Now there’s a bill proposed in the state Legislature that would take a sledgehammer to local control and mandate increased density around transit stops, Sen. Scott Wiener’s State Bill 827.
The bill has received enormous pushback from city councimembers and housing advocates who have long argued for increasing density by transit. A recently-amended version of the bill has its first hearing next week. 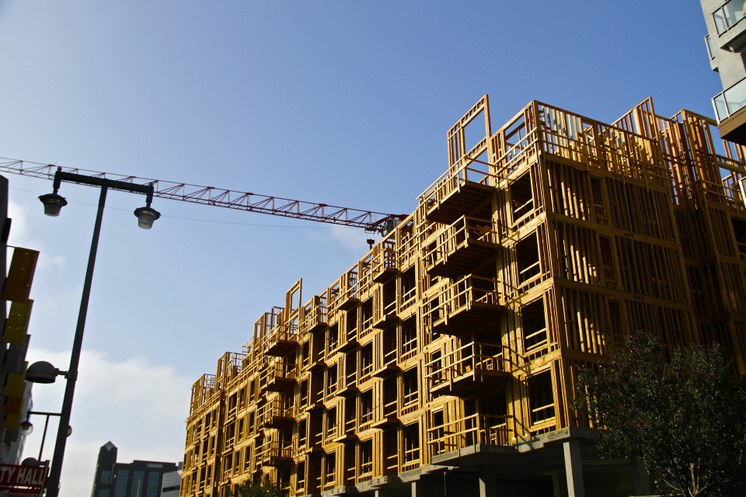 Los Angeles is taking multiple approaches to building new housing, or freeing up existing housing for long-term rental, but is still falling far short of its goal.