A movie consists of four elements: space, time, character and sound. Visual design is absolutely essential to space and to character.

Nelson Coates is president of the Art Directors Guild and he explained the job as shaping ideas visually, by telling aspects of the story that aren’t fully fleshed out in the script.

“You get a script and it will say the upscale doctor's office or the sleek law firm or the futuristic space station and then we have to figure out what that is literally the sets props costumes hair makeup special effects stunt rigs vehicles creature effects all those visual elements. How do you suggest more to that story?,” Coates said.

And the creators of all those visuals make up a huge collaborative team.

Each of those is its own category for the purposes of this Sunday’s awards.

So let’s take production design and this year's nominees. You’ll find they don’t always mesh with the Best Picture; after all sometimes a movie can be more style than story; or vice versa.

But here you have three that actually do line up: Darkest Hour, Dunkirk and The Shape of Water. The other two are Beauty and the Beast and Blade Runner 2049.

In a very unusual twist, the production designer Sarah Greenwood and set decorator Katie Spencer are nominated for both Darkest Hour and Beauty and the Beast.

One thing you’ll notice is that none of these films is set in a regular contemporary setting -- they are either in the past, in fantasyland or in the future.

And that’s typical of the Oscar nominees.

“They all have their complexities but somehow voters always tend to go toward the showy or the things that are so obviously designed because everyone can understand, Oh they they had to create every bit of that from scratch," Coates said.

If you’ve seen Blade Runner 2049 you’ll know it’s stunning especially in terms of its brutalist architecture shot in Budapest, post apocalyptic cityscapes, and sensual minimalist interiors and its intense coloration. But the production designer Dennis Gassner and set decorator Alessandra Querzola had a challenge which was differentiating itself and being equal to its unforgettable predecessor, Ridley Scott’s 1982 original Blade Runner. That film drew largely from the artwork of Syd Mead.

Gassner has been reported as saying his first priority was tackling an updated Spinner, the iconic flying police vehicle. “The Spinner would create the pattern language, which we could then spin-off into the rest of the world,” he said.

Then you have The Shape of Water and what’s really interesting there is that Guillermo del Toro’s original vision was for the movie to be in black and white.

The production designer Paul Austerberry, who is nominated with Jeffrey Melvin and Shane Vieau, told Entertainment Weekly he was initially nervous about the black and white, “because color is such a strong element that you can play with in a story or movie to help shape the mood.”

If you’ve seen the movie you probably came away from it feeling very green and blue -- the lab’s interior is steeped in murky greens, then you have teal throughout the hallways and detailed in the tile of the lab (to signify the future apparently) and the iridescent blue-green scales of the merman. But then you go to the studio of Sally Hawkins’ friend and there the colors are the artist’s more muted golds and olives and brown.

But it’s not just the color, there’s the choices made in every level of detail.

Yes, Black Panther is stunning -- and certainly from a design perspective.

But it’s not on the list for this Sunday’s Oscars. We’ll have to wait a year to see if its visuals make the cut -- and, not that I’m an expert or a voter, but I’m sure it will.

It’s a total and amazingly fresh movie world. After all, the buildings, the technology, the weapons, the landscape; the clothing were drawn from indigenous African design and futurism, bypassing the colonial influences of say, the British and the Dutch.

Just consider that terraced mountain where Wakandans gather in their vivid outfits inspired to watch ritual challenges and celebrations. Then you have the Afrofuturist architecture -- combining grassroots construction and materials with surfaces and shapes you’d find in towers in Shanghai. 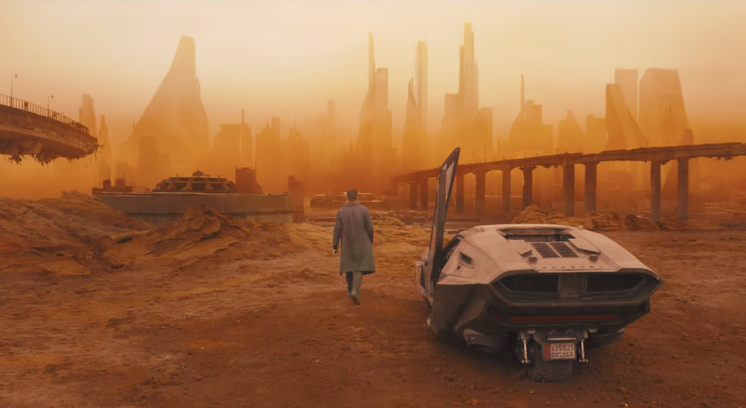 A still from "Blade Runner 2049." Production designer Dennis Gassner and set decorator Alessandra Querzola are nominated for an Academy Award.