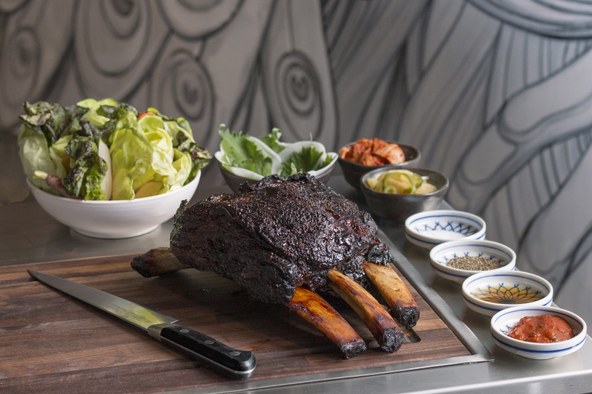 Jonathan Gold calls David Chang’s galbi-seasoned smoked short rib a remarkable
dish, though “a commitment” for the diner at $190. Photo by Andrew Bezek.

Majordomo is Momofuku founder and chef David Chang’s first restaurant in Southern California and possibly LA’s most talked-about opening of the year. Jonathan Gold prefaces his review of Majordomo by noting that he and Chang have a prior history. For instance, he’s been featured in multiple episodes in Chang’s Netflix series Ugly Delicious and once even wrote for Chang’s now-defunct food magazine, Lucky Peach. Gold nonetheless puts his game face on, recounting the highlights from Majordomo’s Korean-inspired menu.

Hear more about David Chang's inspiration for Majordomo in our special extended interview from March 31, 2018.