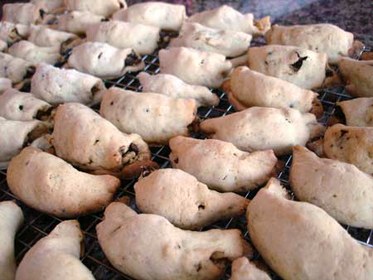 Erika Kerekes is the blogger behind In Erika's Kitchen.  She loves making her grandmother's rugelach, a pastry which is like a filled cookie.  Her grandmother used to make it with orange juice instead of sour cream.

Make the dough: Sift together the flour, baking powder and salt. Set aside. Cream the shortening and sugar together in a stand mixer until well blended and fluffy. Add the eggs, one at a time, and beat until well incorporated. Add the vanilla and mix briefly. Add the dry ingredient mixture and the sour cream, heavy cream or orange juice alternately, until the dough is uniform and well blended. It will be soft, not stiff. Put the dough in the refrigerator while you make the filling.

Make the filling: Toast the walnuts in a dry nonstick pan over high heat; when they start to brown and you can smell them, remove them from the heat and pour them into the bowl of a food processor. Add the remaining ingredients and pulse until the nuts and raisins are chopped, but stop long before they turn into a paste. Set aside.

Form the rugelach: Preheat the oven to 400 degrees. Generously flour a board or the counter. This dough is sticky and soft, so you'll need more flour than you think to roll it successfully. Take a ball of dough the size of a lemon and coat it with flour. Roll it out as thinly as you can into a circle; you want the dough to be thick enough to contain the ingredients without tearing, but no thicker.

Put a heaping tablespoon of the filling, or a little more depending on how big your circle is, onto the dough, leaving a one-inch border around the edge. With the rolling pin, press the filling gently into the dough. Then, using a pizza cutter or pastry scraper or small knife, cut the circle into eight wedges. Roll up each wedge from the point toward the edge, then bend the rolled-up dough into a crescent shape. Some of the filling will escape as you're rolling; it's inevitable, so don't fight it too hard. Put the rugelach on a baking sheet and repeat until all the dough is gone.

I'll warn you, this whole thing takes a while. Be patient. Oh, and put up a pot of coffee, because you'll want it when the rugelach come out of the oven.

Bake the rugelach at 400 degrees for 15-20 minutes, until the edges and bottoms are turning golden brown. Cool on a rack. Think of Grandma as you pour your coffee and take a plate to the table.

Note: I freeze them in zip-top freezer bags. As I said earlier, they're very tasty in their frozen state.

Kenji Lopez-Alt writes the Food Lab column for Serious Eats. He recently wrote about the science behind boiling water. Boiling is the act of "liquid water turning to...

Valerie Gordon is the woman behind Valerie Confections and Valerie at the Market . She sells sweet and savory baked goods using farmers market ingredients at the Sunday...

Cart for a Cause

Cart for a Cause is a fundraising effort for St. Vincent Meals on Wheels , which delivers over 3,000 of meals daily to homebound seniors across Los Angeles. Chef...

David Leite is the publisher of Leite's Culinaria and the author of The New Portuguese Table . He loves using piri piri peppers as they are flavorful and hot. They grow...

Erika Kerekes is the blogger behind In Erika's Kitchen . She loves making her grandmother's rugelach, a pastry which is like a filled cookie. Her grandmother used to make...

Mark Bittman writes the Minimalist column for The New York Times . His latest is The Food Matters Cookbook . Mark has adopted a "less-meat-arianism" approach to eating...

Gustavo Arellano is the food editor for the OC Weekly . This week he reviews Piaggio on Wheels , a food truck in Orange County serving Argentine food. Gustavo likes...