Hosted by Evan Kleiman and Gustavo Arellano May. 05, 2012 Food & Drink

John Gorman was the first Chief Operating Officer of Taco Bell. He remembers how difficult it was to sell tacos in Southern California in the 1960's. Customers were not familiar with the product and he had to hire staff to teach customers how to eat the tacos. At first, most customers would try to eat them like sandwiches, turned on their side. He says Glenn Bell, founder of Taco Bell, was a genius.

Before he opened Taco Bell, Glen Bell operated a burger stand across the street from Mitla Cafe on Route 66 in San Bernadino. Lucy Reyes has been a waitress at Mitla Cafe for 70 years and still remembers Glen Bell coming into drink coffee with the owners of the cafe in the early 50's. According to Gustavo Arellano, Bell learned to make Taco Bell's signature hard shell tacos in the Mitla Cafe kitchen. 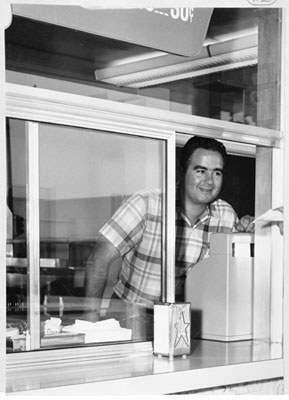 Glen Bell at the take-out window 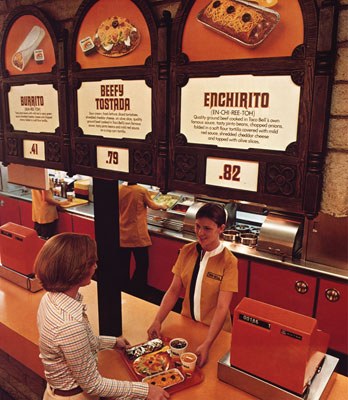 Check out the menu -- and those prices!

Music: "Ja Da" by Roy Eldridge, "La Bamba" by Paco de Lucia and "Baby I Need Your Loving" by The Four Tops

Gustavo Arellano is the editor of the OC Weekly , author of the popular Ask A Mexican column and, most recently, the author of Taco USA : How Mexican Food Conquered...

Cielito Lindo and the Birth of the Taco

KCRW's Saul Gonzalez visits with Diana Guerrero Robertson, owner of Cielito Lindo on Olvera Street. Her family has owned the taquito stand since 1934 and has been...

Larry Cano is the founder of El Torito . In 1954 he took over Bali Hai , a tiki bar in Encino, and turned it into a Mexican restaurant. There, Cano says, he invented what...

John Gorman was the first Chief Operating Officer of Taco Bell . He remembers how difficult it was to sell tacos in Southern California in the 1960's. Customers were not...

The Quest for Authenticity

Fernando López is the founder and owner of Guelaguetza , one of the most revered Oaxacan restaurants in Southern California. He recalls how when he first came to Los...

Dexter Holland is the front man for The Offspring and the man behind Gringo Bandito Hot Sauce . It took him eight years to find his perfect hot sauce recipe. Music:...

Jonathan Gold remembers the culinary landscape of Mexican food in Los Angeles when he first began reviewing restaurants in 1984. He describes it as mostly "#2 combo plates,"...

Roxana Jullapat is the co-owner and pastry chef at Cooks County . Jullapat is using first of the season cherries from Murray Family Farms to make a Chocolate Cherry Tart...